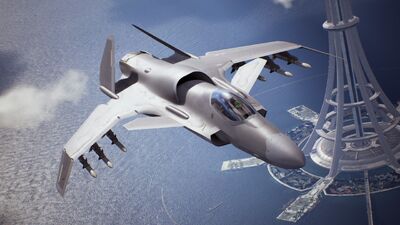 I can't believe how fast that pirate and the Butterfly Master move! ...I thought my craft was higher-spec.Nagase[1] The ASF-X Shinden II (震電Ⅱ, "Magnificent Lightning") is a next-generation combat aircraft. In the Assault Horizon universe, the aircraft was a prototype for the active service... 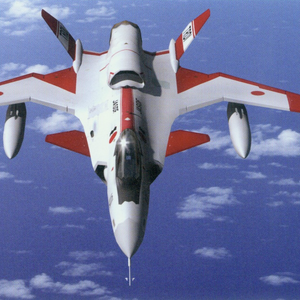 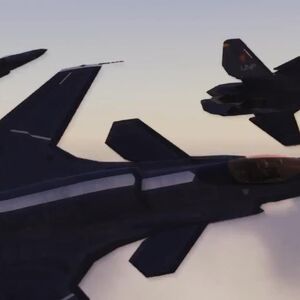 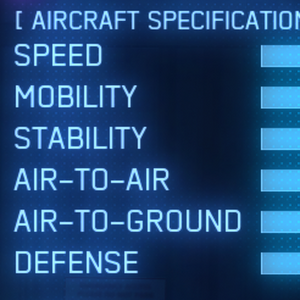 What if they made a ranking tournament that restricted your use to aircraft with forward-swept wings. Those aircraft would be:

With the prize being the XR-45 -Falco- and the Falco Squadron emblem as the prizes with any nicknames that would work well with them.

And yes, the Cariburn was one of Falco Squad's aircraft since they employed COFFIN jets. (See Falco Squadron for info)

---A brief history lesson before I start the thread itself---

In the beginning, we had the F-14A -Wardog-, the first tournament-only plane in Infinity. Many people that wanted the plane were disappointed, knowing they would never get the plane even if they tried. Other people, like me, spent a little money to get more fuel, and fought 'til the end to win the plane. We had hope, we could do it, even without spending money if we stored our fuel in advance. I personally won the Wardog, and it's still my main plane to this day.

Then, the Team Deathmatch tournament came. It offered the F-15 S/MTD -Stripes- for the best 3000 players, and the F-2A -Shogun- for the best 200. While the Stripes was a much stronger plane, a lot of players fell in love with the Shogun's design in the trailers, but had their heart broken knowing only 200 people would get it. But it was ok, I saw it as a prize for the best with little practical use, like the Phoenix emblem in the very first tournament. It was ok.

After that, Namco decided to piss off the players even more. They created Pirates mini-tournament, which offered a good plane, the SU-33 -Pirates-, still for 200 people. At that point I thought "well, we can have both the SU-37 and SU-35 that have the same performance, not a big deal".

And now, the ASF-X -Ridgebacks-. They took a plane that people expected as an end-tier aircraft, and reduced its speed DRASTICALLY, adding beside it the "Top Speed+ L" module to mock us even more. Then, the reveal of the Ridgebacks' plane: with a great top speed that matches Morgan, Berkut and Vent d'Ange, nobody can say this is not one of the best planes in the game. But despite the tournament's name echoing the old Wardog tournament (Pride of Wardog/Pride of Ridgebacks), the plane is still for just 200 people. Normal players don't have even the slightest chance of getting it, especially if you checked their scores during the Pirate tournament.

And now, I want to ask here in the forum what do you think will be the next 200-players only aircraft in the game. Even outside of this list. I personally fear that Namco will degrade even more, and starts creating planes that are even more powerful than what we currently have (like an F-22A -Mobius 1-, SU-47 -Gault- and who know, T-50 -Akula- armed with fully-functional Trinity?), to give them to a such a small number of players they barely count.

So, write your opinions and your worst fears about the next tournament planes.

Can the ASF-X compete with aircraft like the T-50 PAK FA? The ASF-X is an end-of-tree plane, but it's not as far down the tree as the T-50.