You should clarify that this is a poll about the "best AC submarine superweapon". I don't see AC6's Ace of Aces carrier, the Kraken, and I don't see Assault Horizon's annoying battle cruisers. 😛

As I've been saying for over a year, just because the exclusivity ran out doesn't mean it's going to be immediately released elsewhere.

The only other platform where Ace Combat 7 can add its VR component is Steam, since Xbox doesn't have VR. If there's a Steam update, trust me, there'll be an announcement.

This shouldn't be a poll. The F-16XA is an attacker, already clarified by its description and role. The F-16XF is a fighter.

A reply to Zach crouse
1

I would recommend sticking with the controller. It's a fun novelty to play Ace Combat with a flight stick but it's not really designed for it.

That being said, yeah most people, myself included, will recommend the Thrustmaster T.Flight Hotas. If you're on PC, get the one that's cheaper or looks cooler. Otherwise, get the one for your platform. There's also an AC7 edition of it, which is literally the same as placing a sticker of the game's logo on the side of the standard edition, but take your pick.

The reason I'm hesitating is because you've made plenty of posts that plenty of other people have replied to or liked. Why do you want to delete everything?

No, the Marigold was a friendly ship in AC6.

@Dizzy Sailor Yes, both of those apps will stop working.

@X-03 BW You should stop using it while you still have a choice. At some point, the app will stop working completely. Download the newer one once you can.

As announced back in April, the standalone Acepedia mobile app is no longer supported. It has been removed from both the Google Play Store and the iOS App Store.

iOS: The Acepedia mobile app will stop working in iOS 13+.

Android: The Acepedia mobile app may continue to function, but newer Android versions and the new Fandom platform will eventually break the app.

Our first update on the new platformCommunity Central

The reasons for this are multifaceted. Apple does not allow Fandom to maintain so many mobile apps for each wiki, and the resources required to update all of the mobile apps are no longer viable with new data privacy laws and the new Fandom platform being built as we speak.

Instead, Fandom has an updated and improved "unified mobile app". You can browse Acepedia as well as most other popular Fandom wikis all from the same mobile app! Uninstall the Acepedia mobile app (as well as any other individual wiki mobile apps you may have from Fandom) and download the new Fandom mobile app at the following links:

A reply to Dizzy Sailor
1

Fandom mobile websites can edit Fandom wikis, but you have to switch to desktop view, which is not ideal.

The optimal editing experience for any wiki on the internet is on an actual desktop computer.

No, the J-20 doesn't exist in Strangereal only because they haven't added the J-20 to Ace Combat. If they add the J-20, then it'll just be there. None of the aircraft in the games right now have any countries of origin except the fictionals. We don't know which country made the F-22 or the F-35 or the Su-57. We can make educated guesses, sure, but it's a video game.

A reply to Bulgarian Demon Lord
1

This calls back to Stonehenge, where a similar line plays but was poorly translated to English. In Japanese, during the Arsenal Bird fight after Huxian gets hit by AA fire, she refuses to go back to base saying "I'm fine, we can't lose any more allies", Wiseman says "Everyone who said that overdid themselves and died." In Chinese, Wiseman says "That's how former members died, because they were stubborn." But in English, he simply says "Knock that off. Push yourself too hard, and you're dead." Credit to @Qbicle for seeing the line differences. The original lines were definitely referring to Strider 1, thanks to the added context of Huxian's lines in Anchorhead Raid.

A reply to Sean Killingsworth
0 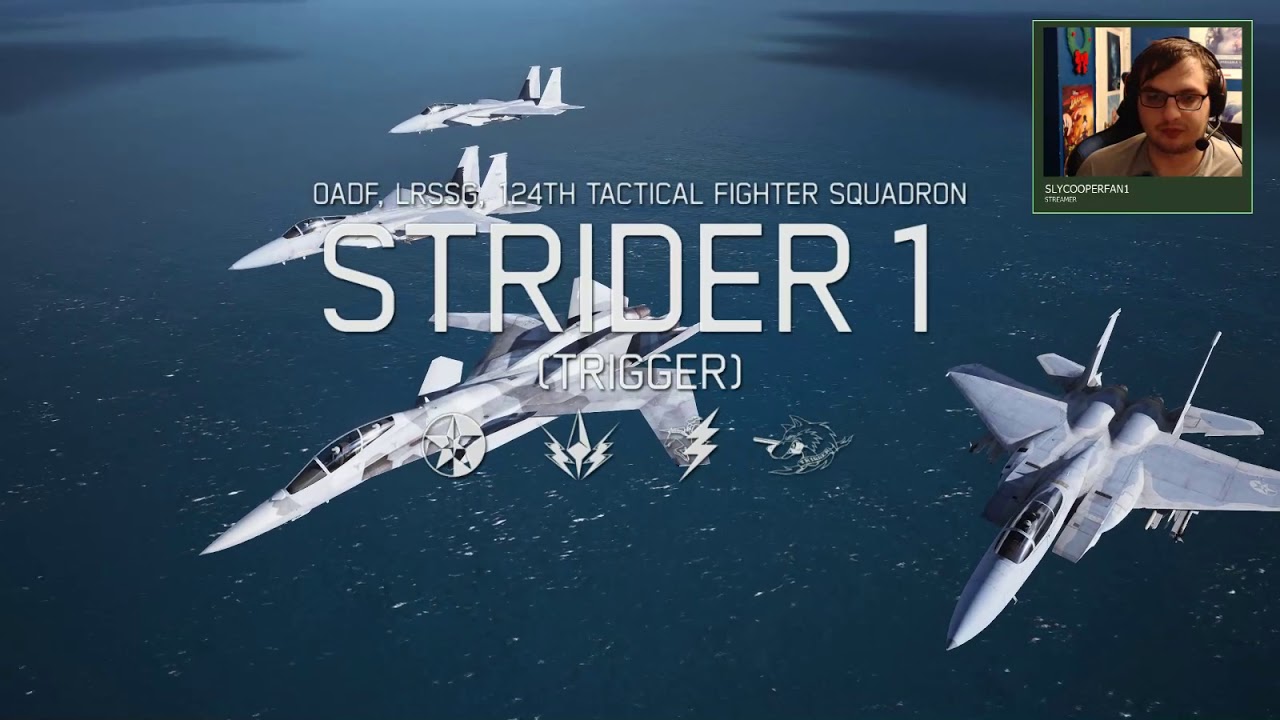 Second question: I mean, kind of, but I've also come to expect that sort of thing in moments like that. See Mission 3 when Brownie is shot down.

Because it's an easter egg.

A reply to Dizzy Sailor
2

I meant in Ace Combat.

A reply to Dizzy Sailor
1

Let's see... the CFA-44 has an EML that can one-shot any aircraft from a far distance, the original X-02 has no such weapons, and the J-20 doesn't even exist...

All regions should be out now, so I'm locking this.

A reply to Rex bombardier 9
1

If we do things like using the same operation articles for the same operations (where all the details match -- where, when, etc.) then I would honestly suggest sticking to the five-ZOE... uh, "rule"? Both games strictly kept five. We can still just specify which game a ZOE appeared in for that operation, that's probably not a big issue. I just don't know if I agree to the idea of adding the ZOEs together, especially since we have those situations like the YF-22 vs F-22 or F-15S vs S/MTD.

To quote David North, "here's a question". Should I start putting together drafts of page changes to implement these ideas and form it out, or should we have another wiki discussion before we make the canon policy change about whether we should keep having operation and mission articles separate? The benefit of waiting means potentially less work, but the benefit of going ahead with the canon policy change allows us to have that discussion at a later date.