@Overnerd You had me happy... til you said "Raptor had canards". Lemme put it in the most friendly way I can do in this scenario: WTF?

There is a reason even newer russian aircraft like the Su-57 or even the Su-35S (your "modern" Su-37) do not use canards. Another thing to read about: thrust vectoring. Have you ever wondered why some engines move in some jets like the ones of the F-22? To replace the canards. They do the job much better than canards. And stealthier. It is pretty much the reason why the Su-35S Flanker-E or the Su-57 Felon do not have canards. And it is pretty much the reason why the F-22 won over the YF-23 in the first place. The YF-23 couldnt pull cobras and power loops like the F-22. And although the YF-23 could actually pull extreme alphas and do a lot of stuff the F-22 and some Flankers can, its not like the USAF or pretty much any air force in the world has a use for such maneuvers, except for flashy air shows. Not useful at all in a real combat scenario. Its safer to stay stealthy and BVR all the way. Thats why 1) Raptors are more agile than most Flankers (if not all), 2) The F-35 is better than any Flanker and pretty much any 4th gen jet (no need for canards, no need for vector thrust, just vibin in the horizon with BVR missiles all day long) and 3) Even Flankers are robust BVR machines as well compared to other 4th gen craft.

Damn I got real excited with my arguing again. Excuse me and my real long explanation (more like argument); I get you must be a newbie to air combat and stuff. If you need any guidance about air combat and stuff, you can always ask in the wiki (unless its something that you can find by just searching, of course).

Oh, BTW, Im not a heart-less being. It is a shame that the Terminator crashed. What a beautiful bird not gonna lie

Stuff doesn't work like that. Read about avionics and BVR. Should be helpful. Oh, BTW, the Raptor is supermaneuverable; it shouldnt have problems outturning and outrunning a Flanker.

(edited by SGmoncayo)
A reply to Javon Evans
2

@CalamitousEnigma pretty sure the Su-33 was cut as well. However, I see your point. A blank space does not necessarily mean something at all.

A reply to Javon Evans
1

Idk man, I'd just see which playable ones aren't owned by you (comparing all the playable aircraft vs the ones you own). Anyways, I didn't play 5, so I wouldn't know.

Damn it is h a r d to remember stuff like that. GOOD WORK

Do PC mods count as Fanmade stuff? I mean, they must be, right?

Nah, I think the F-117 will not be a DLC in AC7. It apoeared on the game already, but idk. However, those other 3 may be on it. I would use an image on the subreddit of Ace Combat to guide myself on those specific planes: 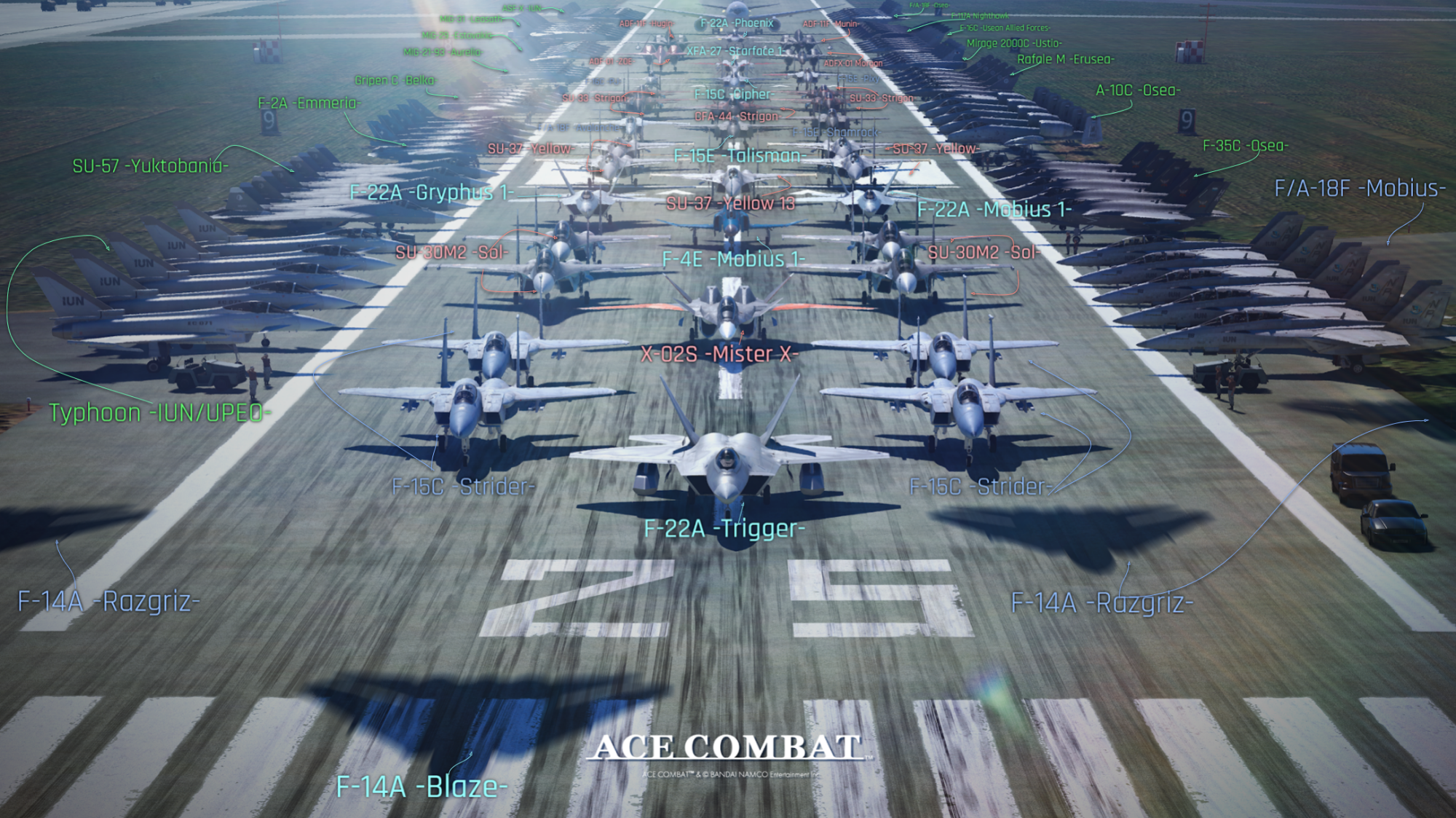 Not only that, the post itself covers a lot of things about the possible meanings of a lot of features on it. I would recommend taking a look at it: https://www.reddit.com/r/acecombat/comments/hj6gor/ac_25th_anniversary_wallpaper_full_analysis/?utm_medium=android_app&utm_source=share

My point of view is:

2) Its weapons are not the best;

The TLS is not that good, the MPBM has terrible homing

The IEWS is kind of useless, although thats more like an opinion

In the end, kind of useless

A reply to Gryphus 1 The Southern Cross
2

I'm putting a 1 star review just to make justice to the greatest game series of all history. You people should do the same.

International Security Assistance Force, a 2001 coalition led by NATO countries made to assist and kind of train Afghanistan's own forces. Nothing that new, I guess.

Well, I meant airframe characteristics, like vector thrust nozzles, serrated nozzles, maybe a futuristic HUD-less cockpit like the F-35? I know I said "expected weaponry", but anyways, taking into account how many real aircraft got Ace Combat exclusive weaponry, then it may have a PLSL or something similar, I guess.

So, lets imagine PA had to add a J-20 as a DLC. Would they do similar to the Su-57 and keep its temporal prototype features, or add "expected" stuff like vector thrust nozzles and weaponry that we expect it to have in the future? Explain your answer if you want.

Remember to leave the stick for a bit though, as it won't work if you're maneouvering already.

If you're like me and start using a joystick, it will be dificult to leave it to perform the PSM.

Thing is, back in 2019, there was a discusion about this exact topic. I'm guessing there is no way you could've known, as a lot of people are completely new to AC and Acepedia, and you may be new as well. This was my answer: 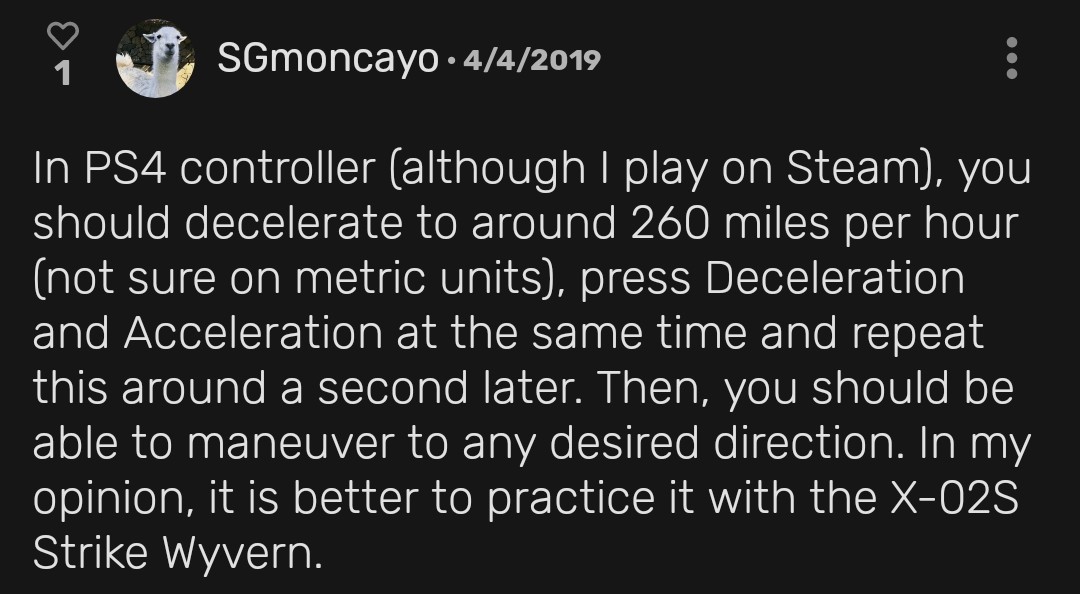 Well, you are not wrong. It is just slightly underrated, especially after trying Assault Horizon.

@X-03 BW Yes, you are able to spam UAVs, but could anyone spam TLS without cheating?

Continued use would just waste a lot of time and ammo, as it isn't one-shot. If someone is to slow to be shot down in a single, persistent TLS shot, not exactly my problem.

Buy it for Xbox. It is kinda cheap. Not a good game though. And with that setup, you could even run FS2020 beautifully, so don't worry for your setup for a while.

Thing is, rather than using the MiG-29 for everything, I'd use something better but not toxic. Maybe a superplane. The Raven, that's it! QAAMs are toxic AF, so no, but what about TLS or UAVs? UAVs are agile and cause a lot of damage, but it and its PLSL be easily avoided with 1) Clouds 2) Flares. TLS is kinda annoying TBH, but does little damage, is a bit hard to aim for a long time, and can be completely blocked by a thin cloud. What do you think?