(also stylized as A-10A -DISTANT THUNDER-) is a special variant of the A-10A Thunderbolt II. It is available for $2.49 as Downloadable Content in Ace Combat 6: Fires of Liberation, and was available as a Limited-Time Drop in late February 2015 in Ace Combat Infinity.

The paint scheme featured on the DistantThunder A-10 is based on the ace pilot of the same name from Ace Combat 5: The Unsung War. They piloted a YA-10B during the mission Heartbreak One, and, upon shooting them down, their paint scheme was available as the YA-10B's SP color. The ace's callsign, and, in turn, the special aircraft's name, is a reference to Ace Combat 04: Shattered Skies's alternate name in Europe: Ace Combat: Distant Thunder. 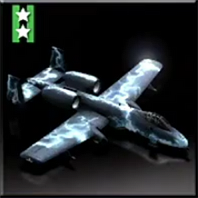 "A special version of the A-10A featuring a lightning pattern across its entire body.
It features robust and reliable performance and is an excellent air-to-ground attacker.
Resembling the ferocity of a lightning storm, its attacks overwhelm enemies, allowing allied ground troops to progress in their mission.
*The aircraft color is based off the color of a named aircraft that appears in ACE COMBAT 5 The Unsung War (Ace Combat Squadron Leader [EU])."

The aircraft was only available as a Limited-Time Drop in late February of 2015.

Nickname
Upgrading this aircraft to Level 20 unlocked the Electric Thunder nickname for use at any time.

Compared to the base A-10A, this aircraft has improved speed, mobility. This aircraft's payload has also been increased, improving its offensive capabilities. However, this improvement comes at the cost of the aircraft's defense. One other thing to note is that, like the Colored Wing Aircraft series and THE iDOLM@STER series of aircraft, this aircraft's standard and special missile smoke trails are colored. In this particular case, the smoke trails are blue.