View source
watch 02:17
New Pokemon Games - The Loop
Do you like this video?
Play Sound

is a modified version of the A-10A Thunderbolt II featuring a Christmas livery. It was available as a DLC skin in Ace Combat: Assault Horizon and later appeared in Ace Combat Infinity as a Special Aircraft. 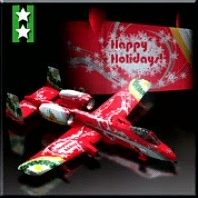 "A special version of the A-10A featuring reindeers and a sleigh.
For an attacker, its exellent turning capabilities and increased ammo capacity result in an aircraft that has a balance of light maneuverability and firepower. When you hear the chimes of the 30 mm, you'll know that Santa is delivering presents to enemies."
― Hangar

The aircraft was only available as a Limited-Time Drop between December 19 and December 31 of 2014. It was also available for 200 Special Supply Tickets in 2015. It is now available from December 2016 onwards.

Nickname
Upgrading this aircraft to Level 20 unlocked the Gift from Heaven nickname for use at any time.