is a modified version of the A-6E Intruder featuring a bright yellow design with Nugget as the pilot of the aircraft. It only appears in Ace Combat Infinity as a Special Aircraft. 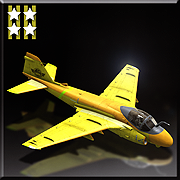 "A special version of the A-6E featuring a Nugget design on the vertical tail.
It features improved turning performance and more space for armaments. Even if it fails to destroy its target in one attack, it has plenty of ammo for follow up attacks. Don't be distracted by the yellow appearance as it possesses good air-to-ground performance making it capable of capturing its prey."
― Hangar

This aircraft was only available to the top 1,000 players, as well as to 10 other players who landed on lucky numbers, in the "Cost Restricted Tournament" Online Co-Op Missions Ranking Tournament in January 2016.

Nickname
Upgrading this aircraft to Level 20 unlocked the Special Force Pilot NUGGET nickname for use at any time.

Retrieved from "https://acecombat.fandom.com/wiki/A-6E_-Nugget-?oldid=208820"
Community content is available under CC-BY-SA unless otherwise noted.