Aces At War: A History

The ADA-01A ADLER (previously known simply as the ADA-01 ADLER) is an attacker variant of the ADF-01 FALKEN. As the first aircraft in the ADA-01 series developed by Gründer Industries, it was designed to be complementary to the FALKEN and defend it from surface-to-air attacks. It was also designed to test the experimental SDBM weapon.

The ADA-01A was planned to appear in Ace Combat 5: The Unsung War, but time constraints prevented the aircraft from being completed. It has yet to make an official in-game appearance. A variant of it, the ADA-01B ADLER, was added to Ace Combat Infinity, replacing the SDBM with the MPBM.

Like the ADF-01 FALKEN, the ADLER is representative of Gründer Industries's improvements in their aircraft development program following the ADFX-01 and ADFX-02 Morgan. The ADLER features a similar angular body to the FALKEN, providing limited stealth capabilities. 42% of the parts required to build the ADLER are the same as those on the FALKEN. Therefore, the ADLER still features some air-to-air capabilities, albeit less effectively than the FALKEN.[1]

However, unlike the FALKEN, the ADLER is designed with a much larger wingspan and three tail wings in addition to the two vertical stabilizers. The main wings also have a smaller angle relative to the back of the aircraft. These changes in wing design give the ADLER a large increase in stability, allowing it to excel at ground attack roles. The increased weight prevents the ADLER from carrying the FALKEN's Tactical Laser System, but its larger wings allowed the ADLER to carry heavier weaponry than most other aircraft, including four retractable 30mm Gatling guns.[1]

The ADLER was additionally planned to support the SDBM by carrying two specialized containers that would keep it stable in flight. If SDBMs weren't equipped, the ADLER's hardpoints could be equipped with any anti-ground or anti-ship weapon.[1] While unconfirmed, it can be assumed that the ADLER also featured the Connection for Flight Interface system popularly featured on the FALKEN, removing a glass canopy in favor of external cameras that provide a 360-degree feed into the aircraft's cockpit.

The ADLER was conceived by Gründer Industries after development was completed on the ADF-01 FALKEN. The objective was to create an aircraft that could complement the FALKEN, which was developed for air superiority, by eliminating ground targets.[1][2]

Gründer completed a prototype model of the ADLER, which flew test flights with a FALKEN. However, the SDBM's complexity indefinitely delayed any further developments on the ADLER, preventing its use in actual combat.[1]

The ADLER was not completed by the time the game released, therefore it is not available for use.[3] 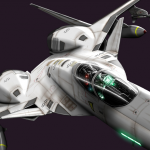