The Eagle Has Landed

is a Special Aircraft variant of the ADA-01B ADLER featuring a red skin similar to that of the Zone of Endless aircraft. It was available to the top 200 participants in the "The Eagle Has Landed" Ranking Tournament in March 2016. 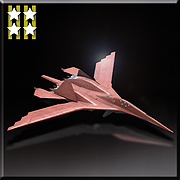 "Ab ADA-01B special aircraft painted red.
With enhanced armor and stability, it serves as an even more powerful close combat support aircraft.
It is the latest elite aircraft, created using cutting edge technology and as powerful as steadfast as ever. It is also capable of unleashing an overwhelming volume of munitions upon the enemy, especially when considered as just a single aircraft, delivering a true rain of fire and lead."
― Hangar

The ADA-01B -Vanquish- was given to the top 200 players who participated in the "The Eagle Has Landed" Online Co-Op Missions Ranking Tournament from March 1–7, 2016. 28 other players also received the aircraft through lucky number placement.

Nickname
Upgrading this aircraft to Level 20 unlocked the Old and Strong nickname for use at any time.

Flyby with Nagase at the end of Operation Bunker Shot

Closeup of the MPBM launch port

Retrieved from "https://acecombat.fandom.com/wiki/ADA-01B_-Vanquish-?oldid=223722"
Community content is available under CC-BY-SA unless otherwise noted.