is a modified version of the ADF-01 FALKEN with a special skin featuring the livery of Wardog Squadron. It appears in Ace Combat Infinity as a Special Aircraft. 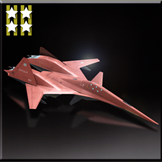 "A special version of the ADF-01 featuring a vivid red color design.
Its design resembles that of an aircraft used by a lone squadron in a certain war.
Its high attack capabilities remain the same, but it now features increased defense.
In addition, it also features increased ammo capacity, enabling it to continue fighting in battle without the need to replenish ammo."

Nickname
Upgrading this aircraft to Level 20 unlocked the Scarlet Avant Garde nickname for use at any time.

Banner advertising the aircraft and the F-35B -Taurus- 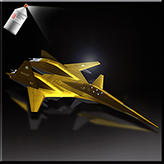 Retrieved from "https://acecombat.fandom.com/wiki/ADF-01_-Osea-?oldid=266052"
Community content is available under CC-BY-SA unless otherwise noted.