View source
watch 04:03
Wiki Targeted (Games)
Do you like this video?
Play Sound

is a Special Aircraft variant of the ADF-01 FALKEN featuring a red paint scheme and modified cockpit based on the Zone of Endless ADF-01 from Ace Combat 2 and Ace Combat: Assault Horizon Legacy. It only appears in Ace Combat Infinity. 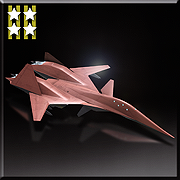 "A special version of the ADF-01 that takes the same body as the "Z.O.E." A.I. unmanned combat aircraft but is designed to be manned. Due to the main body not being equipped with TLS (Tactical Laser System), the equippable weapons are different and the nose is us aerodynamically superior allowing for higher max speed. To further enhance the Z.O.E's "more than human"capabilities that have already been accumulating through multiple operations and experiences using different bodies, it was a natural next step to utilize the the top secret ADF-01 with its "COFFIN System", a closed surrounding monitor cockpit. Both the AI and the body were highly confidential and it was exposed to the general public when a trainer examined a scar on the nose of an aircraft."
― Hangar

Nickname
Upgrading this aircraft to Level 20 unlocked the Not Human nickname for use at any time.