This article concerns the non-playable variant used by Larry Foulke. For the variant available to players, see ADFX-01 Morgan.

The ADFX-02 Morgan was an experimental combat aircraft built by the South Belka Munitions Factory. It was a more advanced variant of the ADFX-01 Morgan, featuring the ability to hold all three of its special weapons at once.

However, the ADFX-02 had various improvements over the ADFX-01. It featured a reinforced airframe as well as the ability to carry all of its special weapons simultaneously.[2] In addition, the ADFX-02's TLS featured hydraulics, minor targeting systems, and internal mirrors, allowing for it to be redirected at different angles towards its target.[1] To keep this system stable, the aircraft was equipped with a G-force limiter set at 7G.[3] The aircraft's ECM system was also improved - it could deflect all incoming missiles and bullets from any angle except the front.[2]

The aircraft's specifications are as follows:[1]

The ADFX-02 was created on January 4, 1985.[1] It did not see any combat until it was stolen by A World With No Boundaries in late 1995, at which point it was painted in Larry Foulke's signature livery with a white body and a single red wing.[2]

On December 31, 1995, AWWNB attempted to launch a V2 from Avalon Dam, Belka. Cipher and Patrick James Beckett managed to halt its launch by destroying the control devices within the dam. Pixy entered the airspace with the ADFX-02, shot down PJ with its TLS, and engaged in a duel against Cipher. AWACS Eagle Eye confirmed that the aircraft had manual control of the V2 launch.[2] Pixy disabled the G-force limiter, and hit G-forces in excess of 11G during the battle.[3] The damage on the TLS from both Cipher and the G-forces caused it to explode, forcing Pixy to resort to launching MPBMs. Eventually, Cipher destroyed the MPBM launcher as well, leading to Pixy activating the aircraft's ECM and launching the V2. Cipher continually fired at the aircraft head-on, eventually destroying it and causing the V2 to detonate harmlessly in the upper atmosphere.[2]

Some time after the battle, the South Belka Munitions Factory, then reformed as Gründer Industries, recovered the ADFX-02's remains from Avalon Dam. They used the data in the aircraft's flight recorder, most of which was from Cipher and Pixy's battle, and used it to create the ADF-01 FALKEN.[1]

The ADFX-02 is not available to the player. For the playable variant, see ADFX-01 Morgan.

Pixy - Appears by default as the only TGT in Zero 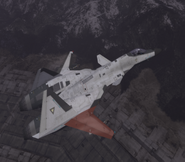 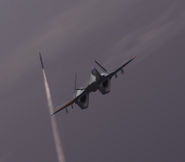 Retrieved from "https://acecombat.fandom.com/wiki/ADFX-02_Morgan?oldid=257629"
Community content is available under CC-BY-SA unless otherwise noted.