Aces At War: A History 2019
The ADFX-10F Prototype Raven[a][1] is an experimental fighter under the Advanced Dominance Fighter's Experimental sub series. It serves as the precursor and prototype to the ADF-11F Raven, testing the feasibility of combining separate cockpit and body units to create a single aircraft. It was jointly developed by Gründer Industries and Erusean Air and Space Administration.

The ADFX-10F is the configuration combining an ADFX-10 nose unit with a RAW-F wing unit made for air-to-air combat. For testing purposes, the wing unit is not equipped with laser weaponry, but it can be equipped with Quick Maneuver Air-to-Air Missiles in the weapon bays and on pylons mounted beneath the wings.[1]

As with the successor model ADF-11F, the ADFX-10F is installed with Gründer Industries' Zone of Endless AI system, allowing it to collect data from mock battles, and ultimately using such information to evolve itself with flight and combat characteristics suitable for unmanned combat aerial vehicle. The nose unit can detach from the wing unit to escape back to safety while preserving valuable combat data for AI.

The Erusean Air and Space Administration defined the concept of seventh generation aircraft as "the ultimate in survivability", and both unmanned drone and manned aircraft versions were planned.[2] The ADFX-10F was developed in small numbers at an EASA base in eastern Usea as a testbed for unmanned drone development, including weapon testing and the nose unit detachment feature.[1]

In a mock air battle, an ADFX-10F single-handedly defeated ten MQ-99s under two minutes, a feat that showed a new generation of unmanned combat aerial vehicle.[1] 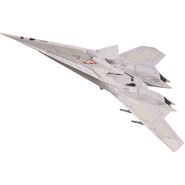 Retrieved from "https://acecombat.fandom.com/wiki/ADFX-10F_Prototype_Raven?oldid=264866"
Community content is available under CC-BY-SA unless otherwise noted.