The AH-64D was deployed extensively by the Osean Federation and the Kingdom of Erusea during the Lighthouse War.[1]

The AH-64D was notably used by Shooter Squadron of NATO's Task Force 108, first known to have seen combat in Africa in the days leading up to the New Russian Federation uprising.[2]

AH-64D was used by the military forces of the UN AND USEA. 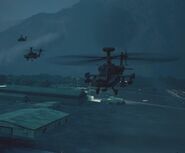 "This ultimate attack helicopter is the pride of the U.S. Army. In addition to excellent maneuverability, its 30 mm chain gun gives it powerful firing potential. The Longbow Radar attached above the main rotor enhances its ability to make use of missiles in all kinds of weather. Nicknamed the "Apache Longbow"."
― Hangar

Retrieved from "https://acecombat.fandom.com/wiki/AH-64D_Apache_Longbow?oldid=264096"
Community content is available under CC-BY-SA unless otherwise noted.