It made its debut in Ace Combat 2 and later appeared in the handheld titles Ace Combat X: Skies of Deception and Ace Combat: Joint Assault.

The Viggens first saw use by the Usean Rebel Forces in Ace Combat 2's depiction of the Usean coup d'état.[1][2] It was not featured in the remake Ace Combat: Assault Horizon Legacy.

The only other recorded use of Viggens was during the Aurelian War where it was sporadically used by the Leasath Air Force, which included an ace pilot with the callsign "Saber".[3]

The aircraft was available to Antares Squadron during the Valahia Crisis.

The aircraft is displayed as JA 37 Viggen. 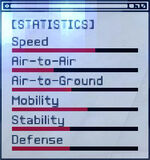 The aircraft is displayed as SF-37.

The SF-37 is not available to the player in this game.