is a Special Aircraft variant of the ASF-X Shinden II with a livery based on the ASF-X's prototype models. 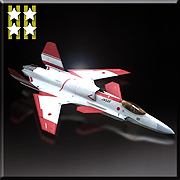 "A special version of the ASF-X that features the colors based on its prototypes. To confirm the limits of its capabilities, each of its parts have gone through rigorous safety testing to achieve higher speed and turning capabilities. Also, ECM (Electronic Counter Measure) pods were tested for this special aircraft but were not approved from use on the official version of this aircraft. Though some capabilities had to be reduced to modify the aircraft for combat-use, it still maintains better performance than that of the official aircraft. It does require higher running costs and puts more pressure on logistics, but that should be considered as a necessary expense."
― Hangar

The aircraft was available in the Skilled Pilot Medal exchange program. Players can exchange 500 medals to acquire the aircraft.

Nickname
Upgrading this aircraft to Level 20 unlocked the Prototype Extreme Model Aircraft nickname for use at any time.

Retrieved from "https://acecombat.fandom.com/wiki/ASF-X_-Experimental-?oldid=224916"
Community content is available under CC-BY-SA unless otherwise noted.