is a modified version of the ASF-X Shinden II featuring a bright yellow livery. It only appears in Ace Combat Infinity as a Special Aircraft.

"A special version of the ASF-X featuring the character, "Nugget" on the vertical tail.
The aircraft has been modified so that even rookie pilots can fly it with ease.
Turning performance has been improved resulting in an aircraft that can make sharp and small turns.
In addition, aircraft stability has also been improved. Behind its cute, yellow appearance, lies an aircraft that can sneak up behind enemies with its quick movements."
― Hangar

The aircraft was only available to the top 3000 players as well as 20 other players landing on lucky numbers in their individual ranks during the "Commence battle. We are not alone!" Ranking Tournament in early January 2015. 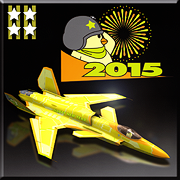 Retrieved from "https://acecombat.fandom.com/wiki/ASF-X_-Happy_New_Year-?oldid=150234"
Community content is available under CC-BY-SA unless otherwise noted.