[Back Again!] PRIDE OF SINGLE LINE

is a modified version of the ASF-X Shinden II with a special skin featuring the livery of Ridgeback Squadron. It only appears in Ace Combat Infinity as a Special Aircraft.

was created for and is in use by the eponymous Ridgeback Squadron of the United Nations Forces. It was later procured for use among the UNF's mercenaries during Operation Eternal Liberation. 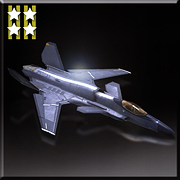 "A special version of the ASF-X featuring a single line design. Air combat abilities have been improved in order for elite pilots to succeed in difficult military operations. The tactical fighter squadron known as the "Ridgebacks", is dispatched on various military operations and is always expected to succeed as it represents the UNF's elite squadron."
― Hangar

Nickname
Upgrading this aircraft to Level 20 unlocked the Butterfly Hater nickname for use at any time.

on a runway in San Diego

A formation flight of ASF-X -Ridgebacks-

A formation flight of ASF-X -Ridgebacks-

with an SR-71 Blackbird

Retrieved from "https://acecombat.fandom.com/wiki/ASF-X_-Ridgebacks-?oldid=223732"
Community content is available under CC-BY-SA unless otherwise noted.