is a modified version of the ATD-0 featuring the Mitsubishi ATD-X Shinshin prototype paint scheme. It only appears in Ace Combat Infinity as a Special Aircraft. 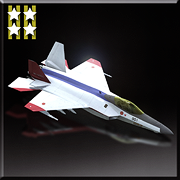 "A special version of the ATD-0 featuring the same color scheme as the "Advanced Technological Demonstrator-X". In addition to the red, white and blue colors, the aircraft number and marks are also represented in the design. Based on data obtained from the demonstrator aircraft, acceleration and turning performance have been improved to accompany its high maneuverability."
― Hangar

This aircraft was available to the top 200 participants in the "Ring Domination" Team Deathmatch Ranking Tournament in early February 2016 as well as 28 other players who landed on lucky numbers in the tournament.

Nickname
Upgrading this aircraft to Level 20 unlocked the Made in Japan nickname for use at any time.

Flyby
Retrieved from "https://acecombat.fandom.com/wiki/ATD-0_-Experimental-?oldid=223736"
Community content is available under CC-BY-SA unless otherwise noted.