is a modified version of the AV-8B Harrier II plus featuring an Aquarius theme. It only appears in Ace Combat Infinity as a Special Aircraft. 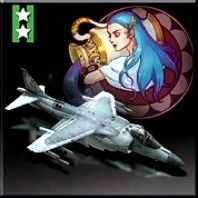 "A special version of the AV-8B featuring an Aquarius theme.
It features high-speed performance, enabling it to attack ground targets at low speed ranges and accelerate quickly across the battlefield.
This aircraft has the ability to quickly destroy ground targets, just like how water can flood the earth in the blink of an eye."
― Hangar

Nickname
Upgrading this aircraft to Level 20 unlocked the No Crying Over Spilt Milk nickname for use at any time.

Banner advertising the aircraft and the F/A-18F -Jolly Rogers-

Retrieved from "https://acecombat.fandom.com/wiki/AV-8B_-Aquarius-?oldid=214989"
Community content is available under CC-BY-SA unless otherwise noted.