is a special version of the AV-8B Harrier II plus featuring the character Hibiki Ganaha from THE iDOLM@STER. It only appears in Ace Combat Infinity as a Special Aircraft. 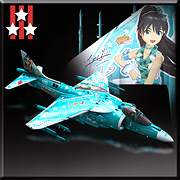 "A special version of the AV-8B + featuring the same color scheme as Hibiki Ganaha from THE IDOLM@STER series. This aircraft excels not only in terms of attack and maneuverability, but also appearance. Hibiki is happy as long as the pilot's skills meet her expectations."
― Hangar

The aircraft was only available as a Limited-Time Drop between March 5 and April 1 of 2015 during the IDOLM@STER Event #3. It was available again as Random Drop between February 1 and Februrary 29, 2016.

Nickname
Upgrading this aircraft to Level 20 unlocked the Pon De Beach nickname for use at any time.

Retrieved from "https://acecombat.fandom.com/wiki/AV-8B_-HIBIKI-?oldid=208813"
Community content is available under CC-BY-SA unless otherwise noted.