is a modified version of the AV-8B Harrier II plus with a special skin featuring the livery of Kim Aba from Area 88. It only appears in Ace Combat Infinity as a Special Aircraft. 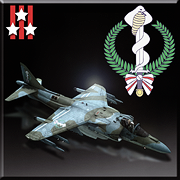 "This is a special version of the AV-8B which features the same color scheme as the aircraft flown by Kim Aba, a character who appears in the Japanese comic, "Area 88". It features improved acceleration performance and turning capabilities in low speed ranges allowing it to make tight turns during air-to-ground attacks. In addition, it is a VTOL (vertical take-off and landing) aircraft making it suitable for carrying out search missions in harsh forests and narrow valleys."
― Hangar

The aircraft was only available as a Limited-Time Drop between October 4 and October 15 of 2014 during the Area 88 Collaboration Event.

Nickname
Upgrading this aircraft to Level 20 unlocked the Practice Makes Perfect nickname for use at any time.