Start a Wiki
watch 01:50
The Loop (Games)
Do you like this video?
footnote
This article or section needs additional citations for verification.
Please help improve this article by adding citations to reliable sources.
Unsourced material may be challenged and removed.
pencil
All right, gentlemen, it's time to clean house!
This article or section may require a cleanup to meet Acepedia's quality standards.

Abyssal Dision (アビサル・ディジョン - Katakana: Abisaru Dijon) is a character featured in Ace Combat 3: Electrosphere. Born in Usea in 1997, he was a pilot of the General Resource Defense Force, flying several successful sorties for the group in the past. He was the first and only test subject of Yoko Martha Inoue's sublimation project, and is later revealed to be the main antagonist of the JP version.

In 2018, Dision finished his academy in Sandbury Defense College, organized by General Resources Limited He graduated with a degree in Aerospace Engineering. Then he joined up with General Resource Defense Force on September soon after his graduation. During his time with GRDF, he was designated as Ace pilot after successfully carrying out missions he was assigned to in outstanding result, including his service of suppressing terrorist operation in 2026.

Dision became romantically involved with Yoko Martha Inoue, who was also at General Resource. Yoko was researching sublimation and eventually chose Dision to help her test the concept. On June 14, 2030, Yoko successfully created a copy of Dision and uploaded it to the electrosphere before General Resource operatives detonated a bomb, killing both of them. The copy of Dision watched the event from security cameras.

In the same year, Dision was recognized that he met a 9-year-old girl that possessed fascinate ability in piloting, especially using COFFIN system. Later, he invited this girl, known as Rena Hirose, to participate GR's power development project, before she joined UPEO 7 years later, in 2037.

Dision was a military partner of Keith Bryan, who graduated from the same college in Sandbury Desert. During the war, they were seen to have some flight and combat trainings with UPEO'S pilots. But later on, he defected from the GRDF and was found out that he was the primary leader of a terrorist organization, called Ouroboros. He was alleged that he had led the organization for a long time, and later he was revealed he was an 'Artificial Intelligence' copy of the original Dision that had the ability to hack another AI program that flew aircraft through COFFIN system - similar to that of Nemo's. His presence as AI programmed pilot was the result of sublimation back in 2030.

Dision successfully lured a selection of key players in the war (one of which was Cynthia, a NEU Ace Pilot) into signing up for the Sublimation project, to "experience a world unlimited by the boundaries of flesh". To try and convince Rena into flying the Night Raven for him, he first promised her an explanation to her past and the Night Raven project. Failing to convert her to Ouroboros, he attempted to use her ENSI connection to corrupt her memory.

In the Corporate War, the AI Dision will die regardless of the path Nemo chooses.

Abyssal Dision makes a cameo in Ace Combat: Joint Assault. He is the 8th Ace Combat ace fought in the mission. He flies an F-15S/MTD in combat, alluding to the original Eagle+. 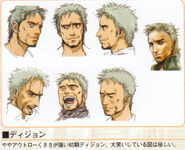 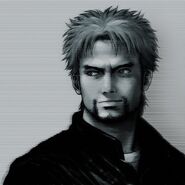 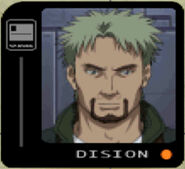 Dision's appearance in Ace Combat: Joint Assault
Add a photo to this gallery

Retrieved from "https://acecombat.fandom.com/wiki/Abyssal_Dision?oldid=225440"
Community content is available under CC-BY-SA unless otherwise noted.