Despite the title and box art outside of Japan, Assault Horizon Legacy bears little resemblance to Ace Combat: Assault Horizon. The game is instead a remake of Ace Combat 2; it takes place in the Strangereal universe, on the Usean continent during the Usean coup d'état of 1998.

In the years following the Belkan War, the Osean Federation and the Union of Yuktobanian Republics continued to establish themselves as the greatest superpowers in the world. The northern and western nations of the Usean Continent decided to put aside their long-lasting mutual differences and band together to prevent either of the superpowers from obtaining Usean land. However, the southern nations opposed this and wished to join the Osean Federation, who extended a military pact to the leaders of those southern nations.

On the day of the treaty's signing, conservative extremists (likely originating from, but not backed by, the northern and western Usean countries) launched a coup d'état across the entire continent, fearing the presence of the Osean military and the loss of their mining rights. The Usean Allied Forces underestimated the rebels' power and were soon forced to retreat. It was soon believed that the Rebel Forces would take over the governments of the continent.

As a last-ditch effort, Allied Forces HQ initiated Operation Fighter's Honor, in which they contracted the Scarface Squadron to assist in and spearhead an assault to tip the war back in the Allied Forces' favor. The player controls Scarface One through multiple battles across the continent.

Assault Horizon Legacy features standard Ace Combat gameplay, specifically that of Ace Combat 04: Shattered Skies, designed for the Nintendo 3DS's controls, while using a slightly enhanced version of Ace Combat: Joint Assault's engine. The player pilots an aircraft of their choice through different missions, destroying all mission-important targets. Before each mission, the player can select which aircraft and special munitions to fly with, as well as which wingman to fly alongside the player (if at all). The destruction of an enemy will result in a congratulatory message, such as "Nice shot!" or "Good job!". However, the message appears on the lower edge of the screen, as opposed to the center of the screen.

Two new mechanics introduced in Assault Horizon Legacy are known as Attack Maneuvers and Evasive Maneuvers. These are not to be confused with Dogfight Mode, which is used in Assault Horizon. Attack Maneuvers require the player to stay as close to an enemy plane as possible to fill up the AM Gauge. When the gauge is full enough, the player can press the Y button to allow the game to move the aircraft behind the enemy plane. Evasive Maneuvers are performed to evade incoming missiles from any direction. The player must press the Y button while simultaneously moving the Circle Pad either left or right (whichever is indicated) to evade a missile that is closing in.

The High-G Turn feature returns from Ace Combat 6: Fires of Liberation and can be used by pressing both shoulder buttons simultaneously.

As in Ace Combat 2, the player can select to have a wingman to fly alongside them on certain missions, which will cost the player some money. The two wingmen from AC2 reprise their roles: John Herbert, TAC name "Slash", and Kei Nagase, TAC name "Edge". Unlike AC2, the player cannot give their wingman a specific order. Slash will always engage targets indiscriminately, whereas Edge will always defend the player.

Another feature of Assault Horizon Legacy, introduced previously in Ace Combat Zero: The Belkan War, is special Ace squadrons. Each of the squadrons' appearances triggers an "introductory cutscene," taunting the player and setting the scene, not unlike The Belkan War. The four Ace squadrons are Lancer Squadron, Beast Squadron, Cocoon Squadron, and Albireo Squadron. Z.O.E., which has now been named as Zone of Endless, is also featured as another Ace squadron.

The general gameplay of Assault Horizon Legacy + is the same as the original version. However, if the game is being played on a New Nintendo 3DS or New Nintendo 3DS XL, the system's improvements are utilized by the game. They are as follows:

The game contains aircraft featured in the original Ace Combat 2, such as the Su-25 Frogfoot and the F-16C Fighting Falcon. New aircraft included are the PAK FA, Su-37 Terminator, Su-47 Berkut, F-2A, and F-22A Raptor. Original aircraft, such as the ADF-01 FALKEN and the XFA-27, are also available. Like Ace Combat X: Skies of Deception and Ace Combat: Joint Assault, aircraft in this game also can be tuned.

Assault Horizon Legacy + includes all of the aircraft from the original game. However, in a first for the series, various Nintendo-themed aircraft can be obtained in the + version of the game, either by finding Question Blocks within missions[4] or by syncing amiibo with the system. These are individual aircraft with modified statistics, similar to Special Aircraft from Ace Combat Infinity. Some Nintendo aircraft are exclusive to amiibos, and the Question Block aircraft feature alternate skins exclusive to amiibos. Each aircraft also comes with a special cockpit part for tuning. Attempting to synchronize an amiibo that does not award an aircraft (for example, Shulk) will inform the player that the amiibo is not compatible with the game.

Following is the list of Nintendo-themed aircraft in Legacy +, in the same order as in-game, and what amiibo types unlock them. Any amiibo of that type will work (for example, the Breath of the Wild Zelda amiibo, despite being released after Legacy +, will still unlock the F-15SE <ZELDA>). If the aircraft can be unlocked by destroying a Question Block, the number of the block is listed (which corresponds to the list of Question Blocks at the eponymous article).

The development of Assault Horizon Legacy was first announced in September 2010, being featured in an article describing games that were then in development, being tentatively known as Ace Combat 3D.[6] Months later, during E3 2011, the first footage and screenshots of the game were released.[7] Through 2011, the nature of the screenshots (more specifically, the locations featured and fact that the player aircraft brandished the roundel of the Scarface Squadron) gave birth to speculation that the game would be a remake or sequel to Ace Combat 2. Said rumors became true on September 13, 2011, when Namco Bandai Games released the first official trailer of the game, confirming its name as Ace Combat 3D: Cross Rumble in Japanese regions. The second official trailer, released on September 26, 2011, confirmed the name in other regions would be Ace Combat: Assault Horizon Legacy.

On November 4, 2014, it was announced that the game would be re-released as Ace Combat: Assault Horizon Legacy + for the New Nintendo 3DS with functionality for the improved 3D and added buttons, as well as special aircraft themed after Nintendo properties such as Mario.[1][8]

In Europe, three of the five themes - the Project Aces logo, the ADF-01 FALKEN, and Phoenix's emblem - were released under the names "ACES", "ADF-01", and "PHOENIX", respectively. The themes released on February 13 coinciding with the game's release. Each theme costs £0.79/€0.99, but they could also have been obtained for free if one purchased Assault Horizon Legacy + through the eShop prior to March 12, 2015.[10][11] 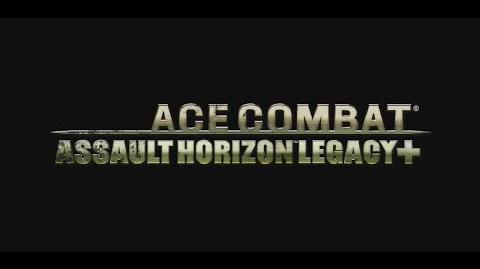 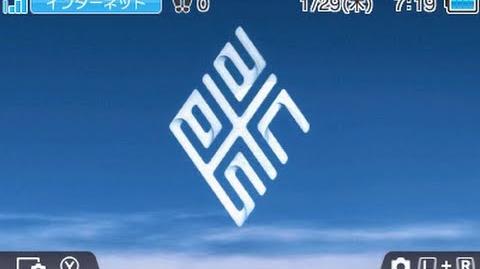 3DS Themes Ace Combat Special (Jan. 29)
A demonstration of the five 3DS themes
Add a photo to this gallery

A-10 over Tin Castle

F-14 shooting down an unknown enemy over Tin Castle

A cockpit view of a Eurofighter 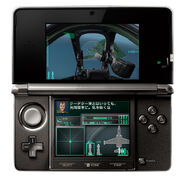 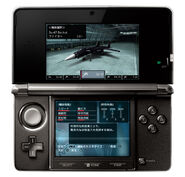 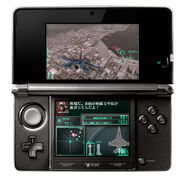 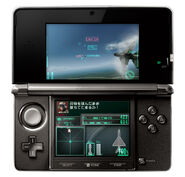 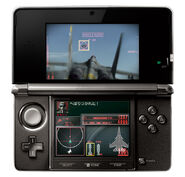 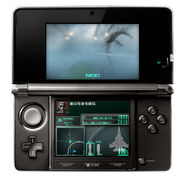 Stereoscopic demo
Add a photo to this gallery