This game is no longer available for digital purchase on the PlayStation Store.

Japanese website
Ace Combat: Joint Assault is a 2010 flight simulation game developed by Namco Bandai. It was released in Japan, Europe, and North America in 2010, and is known as Ace Combat X2: Joint Assault in its home country. It is the first full game to take place in the real world.

Joint Assault retains the basic gameplay from its predecessor, but with significant additions and alterations. Aerial combat adopts a visual system called "Enhanced Combat View" to alter the perspective of enemy aircraft close to the player, altering their size to make them appear much closer as a precursor to Dogfight Mode from Ace Combat: Assault Horizon. The arsenal of weapons from Skies of Deception has been greatly enlarged: basic missiles are divided into Standard, High Accuracy, Lightweight, and Heavyweight types tailored for different situations, with various benefits and drawbacks.

Ace Combat: Joint Assault includes an arsenal of 44 playable aircraft, far exceeding the total from the previous game. Unlike the previous game, they are organized according to country of origin, beginning with United States aircraft. All aircraft can be upgraded with the Tuning system, which has been upgraded to be available for all aircraft instead of being limited to fictional jets, as with Ace Combat X: Skies of Deception. Parts from four categories (Engine, Wing, Armor, and Avionics) can be purchased and installed to increase performance at the cost of negatively affecting other parameters.

New additions to the game include the F6F-5 Hellcat and A6M5 ZERO propeller aircraft from World War II, which may be unlocked as postgame bonuses. A civilian aircraft, the 747 200B airliner of Boeing is the main aircraft for a particular mission in the main Campaign, and the main original fighter introduced in the game is the GAF-1 Varcolac. Fictional jets from Skies of Deception such as the YR-302 Fregata, XFA-24A Apalis, and longstanding aircraft including the ADF-01 FALKEN are also featured, but at a much greater cost than in previous titles.

Aircraft contain six available colors for selection, which are unlocked as a Kill Rate Gauge is filled by continuously destroying targets and completing missions with a certain jet. The colors available range from a basic colorway modeled after existing production aircraft, to special colors from Ace Combat X and "legacy" liveries lifted from past games, such those used by the Espada Squadron and Mobius 1. Other colors are cultural references to other Namco series and real life subjects, such as the Japanese armed forces and tokusatsu shows.

The multiplayer component from Ace Combat X makes a reappearance, but has been modified to be compatible with both Ad-Hoc and Infrastructure modes, allowing players to engage in campaign missions or competitive sessions from anywhere in the world.

The plot of Joint Assault takes place in late 2010 and early 2011,[4] during the Great Recession. The story opens with the private military company Martinez Security participating in a military exercise with the United States Navy Seventh Fleet and Japan Self-Defense Forces in the Pacific Ocean. Antares One, an experienced air force pilot and new arrival to the M42 Antares Squadron, undergoes improvised training at the event by destroying unmanned aircraft with the Rigel Squadron, only for the Navy to receive a message that Japan is under attack by unknown forces.

Antares destroys all aircraft preparing to join the attack over Midway Island, and Martinez is sent to Tokyo to halt an airborne assault led by a giant aircraft, the Spiridus, which they fend off after disabling its onboard railgun. Following the incident in the capital, an Eastern European terrorist organization called the Valahia announces itself as the perpetrator of the attack, and launches a wide offensive to attack Tokyo once more. Collaborating with the Seventh Fleet and the Japan Self-Defense Forces, Antares repels the attacks and destroys an agile airship over Tokyo, putting an end to the crisis in Japan.

A businessman named Andre Olivieri, whose insurance company narrowly survived the Great Recession, approaches the global community to finance a coalition of private military companies, the International Union Peacekeeping Force, to hunt down Valahia. After Valahia leader Nicolae Dumitrescu bribes Rigel Squadron leader Milosz Sulejmani and his men into defecting to his group in the final Tokyo attack, Martinez joins the IUPF to clear their name and launches operations against Valahia forces across Europe and Asia, dispatching Antares and his men to Egypt, the United Arab Emirates and Turkey to dismantle their efforts.

During a mission against Valahia forces in the Croatian Adriatic Sea, Antares is lured into an ambush by Sulejmani and his men, now called the Varcolac Squadron, but defeat them and drive them off. After the battle in Croatia, the Spiridus is deployed once more to attack the British capital of London, but is heavily damaged by Antares. The ship's captain attempts to fire the Balaur against Westminster Palace, but the weapon malfunctions thanks to Antares' intervention, leading the Spiridus to sink in the River Thames. The team later destroys a stand-alone Balaur in Southern Romania and its guidance radar in Serbian Mountains, where they defeat Varcolac once more.

After the destruction of the second Balaur, Antares One is personally hired by Olivieri to fly him in his personal Boeing 747 200B airliner through the Turkish Mountains. As he speaks with an unidentified caller via phone over the ongoing crisis, Dumitrescu's men attempt to shoot down the plane, but Antares escapes the ambush and delivers Olivieri to an IUPF airfield. Becoming desperate, the Valahia attempt to transport nuclear fuel through a container ship in the Dardanelles, but are foiled by Martinez, who later act to stop Dumitrescu from launching nuclear missiles at the USA and Europe from an old Soviet missile silo in Turkmenistan.

In their third encounter, Varcolac is shot down by Antares and his team before they fly inside the silo itself to stop the missile launch, killing Dumitrescu as its infrastructure collapses. After the destruction of the complex, Burford discovers that Valahia was manipulated by Olivieri as part of a plot known as the Golden Axe Plan, whose ultimate purpose is allowing Olivieri Life Insurance to reap profits from the global increase in demand for war insurance. Believing that Martinez would not condone actions against the IUPF's main funder, Fredric Burford and the M42 Squadron left the IUPF to stop Olivieri's plan.

Burford, his E-767 aircraft Canopus and Antares arrived at Midway Island by their company ship, where Antares destroyed 4 Orgois manned by the private army hired by OLI sent to kill them. After receiving supplies from a resupply fleet allied with Martinez, the group move to the Western United States to eliminate Golden Axe Plan Private Army preparing to attack San Francisco, taking over an airport in Sierra Mountains, Nevada and destroying a new Spiridus over Lake Tahoe with the aid of troops from Martinez's ground division, giving them a foothold to prepare for the upcoming attack.

Days after Antares' missions in the region, Olivieri's private army launches a large scale attack on San Francisco as the final stage of the Golden Axe Plan, causing the US Navy's Third Fleet to assist Martinez Security and successfully repels the attack. Sulejmani and his men appear flying the GAF-1 Varcolac fighter developed by OLI, and engages them in a final battle to prove their superiority. After his men are killed, Sulejmani suffers a mental breakdown and reveals his past as a child soldier, declaring that money would allow him to reclaim his lost life before charging Antares in a final assault that costs him his life.

Dog Bear Unit, the allied unit that was previously assisted Antares, move to Olivieri Life Insurance's headquarters to secure the underground data center that contains information of the entire Golden Axe Plan. Antares launches a final attack and destroys the entrance wall to the building, killing a defiant Olivieri as he challenges them in front of the building and putting an end to the crisis.

As of June 30, 2016, Joint Assault was removed from the PlayStation Store. Players could no longer purchase it digitally. However, players who already had purchased the game could still download it at any time.[5] 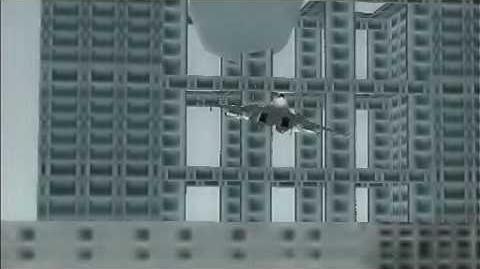 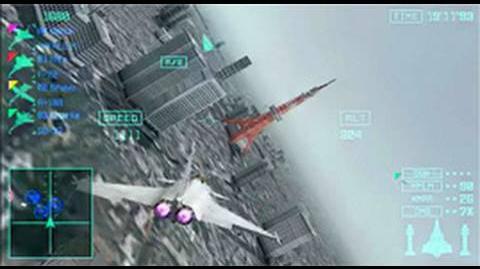 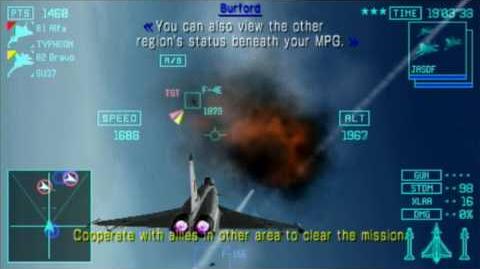 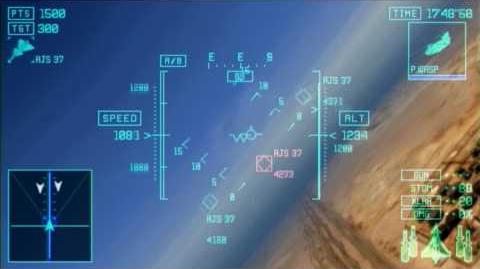 Concept art
Add a photo to this gallery

Retrieved from "https://acecombat.fandom.com/wiki/Ace_Combat:_Joint_Assault?oldid=263362"
Community content is available under CC-BY-SA unless otherwise noted.