Ace Combat: Northern Wings was a Java game for mobile phones released in December 2011. The player takes the role of Grendel 1, an ace pilot of Nordennavic Royal Air Force, who is involved in many secret conflicts around the globe.

The game follows the story of the Grendel Squadron, a top secret squadron from the Nordennavic Royal Air Force, in several operations across the globe. The game's plot spans from September 3, 1999 (two months after the Ulysses 1994XF04 impact) through April 1, 2016, the same date as the ending of the Emmeria-Estovakia War.

Unlike most games in the series, which mainly featured existing or prototype aircraft, Northern Wings features nine new original designs, most of which take design cues from real-life aircraft. Each aircraft can be upgraded twice (excluding the Arvakr V-55 and the Arkbird I). 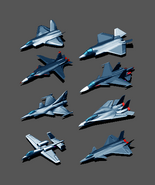 A.C.N.W. Wallpaper
Add a photo to this gallery