"I was just a child when the stars fell from the skies. But I remember how they built a cannon to destroy them. And in turn, how that cannon brought war upon us."
― Side Story Narrator, Interlude #01

Ace Combat 04: Shattered Skies (エースコンバット04 シャッタードスカイ Ēsu Konbatto Zero Fō: Shattādo Sukai), published in Europe as Ace Combat: Distant Thunder, is the fourth video game in the Ace Combat series and the first on the PlayStation 2. It was released on September 13, 2001 in Japan, November 11, 2001 in North America, and February 8, 2002 in Europe.[1]

The game's single-player campaign follows Mobius 1, a legendary ace who almost single-handedly turned the tide of the Continental War. A parallel narrative, told between missions by a man recounting his time as a child during the war, relates the story of Yellow 13, the leader of Erusea's Yellow Squadron and Mobius 1's arch-nemesis.

Ace Combat 04: Shattered Skies, while over a decade old, remains the most successful Ace Combat installment. It is the only game in the series to have surpassed 2,500,000 international sales, reaching a total of 2,640,000 by 2008.[2] It is also the most critically acclaimed installment of the series, scoring an average of 86.07% on GameRankings[3] and an average of 89 on Metacritic.[4] 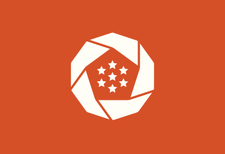 Ace Combat 04 takes place in 2004 on Strangereal's Earth. Five years prior, a large asteroid named Ulysses 1994XF04 made impact with the planet, killing many civilians and destabilizing the Usean continent. A large network of eight railguns, Stonehenge, was created to defend the continent from total destruction. In 2003, the Federal Republic of Erusea seized the Stonehenge facility and turned it into an anti-aircraft weapon; the Independent State Allied Forces (ISAF) attempted to destroy Stonehenge, but failed, and were forced to retreat from the Usean mainland to North Point, an island nation to the northeast.

The player takes control of Mobius 1 in September 2004, a year after the conflict began, as one of the few ISAF pilots still remaining. Mobius 1 participates in various missions with other ISAF pilots over the next few months in eastern Usea, outside of Stonehenge's range, to defend North Point and weaken Erusea's influence. Erusea attempts to deploy their "invincible" Aegir Fleet to destroy North Point, but ISAF pre-emptively sinks it, giving them an opportunity to perform a counterattack. As ISAF pushes further inland, Stonehenge repeatedly fires on their pilots in an effort to shoot them down. Erusea also deploys Yellow Squadron to the front lines, but Mobius 1 evades them each time they appear.

In April 2005, Mobius 1 participates in a second air assault operation to destroy Stonehenge, and single-handedly destroys each railgun. Yellow Squadron appears late to the combat zone, and Mobius 1 shoots down Yellow 4, Yellow 13's closest wingman. The squadron retreats, and ISAF begins a large-scale ground offensive to retake Usea and invade Erusea. ISAF receives intelligence that Erusea is building a new superweapon, Megalith. By the time Mobius 1 assists ISAF's siege on Erusea's capital city, Farbanti (during which he shoots down all of Yellow Squadron), Megalith is completed and begins attacking ISAF. Mobius 1, with the newly-reformed Mobius Squadron, destroys Megalith and brings the war to an end.

While the player participates in the main campaign, interludes (cutscenes)—designed by Studio 4°C—also play in between missions that present another perspective of the war. This "Side Story" is told through an adult narrator detailing his experience with the war when he was a child in San Salvacion, a city that Erusea captured at the start of the war. Around that time, Yellow 13 had indirectly killed the narrator's parents by shooting down an aircraft that landed on their house; the narrator was subsequently forced to live with his drunkard uncle in the city, and played his harmonica at the local Sky Kid bar to make a living.

After ISAF liberated San Salvacion near the end of the war, Yellow Squadron retreated to Farbanti, and the narrator and barkeeper's daughter followed them. They witnessed Mobius 1 shoot down Yellow Squadron, in particular Yellow 13, who they made a makeshift grave to in a nearby forest. As an adult, the narrator sums up his experience in a letter addressed to Mobius 1, asking if Yellow 13 died happy, having met his match in the skies.

None of the characters in Ace Combat 04 are referred to by a proper name. They are either identified by a callsign or a generic description.

Mobius 1 is supported by ISAF pilots from other squadrons as well, including Omega, Viper, Rapier, and Halo. Other minor characters include Bravo 1, Baelz, the Erusean Supreme Commander, and Collins, as well as Nagase from Ace Combat 2.

Like the rest of the Ace Combat games, most of the game takes place in the air, seen from Mobius 1's cockpit. The single-player campaign is split into 18 missions, which are played in a linear sequence. Before each mission, the player selects an available plane to pilot and steers it through the combat airspace to complete their mission objectives. Some missions feature a "Mission Update", at which point the objective changes, resetting the mission timer. There is no interaction with non-player characters like in later games, and the campaign itself has only indirect relation to the story told in the "Interludes" (cutscenes between the missions).

Compared to the later Ace Combat games, Shattered Skies is more arcade-like in gameplay. Most mission assignments revolve around scoring enough points within the time limit, and then continuing to collect more points until time runs out. Mission ranks are assigned based exclusively on the scores (later games additionally feature time requirements). Non-linearity is confined to selecting from available targets in a particular mission.

The player can choose between six difficulty levels in the game: Very Easy, Easy, Normal, Hard, Expert, and Ace. The last two difficulty settings are unlocked by beating the game on the respective previous difficulty. Additionally, the player can select either the Normal (full control of the aircraft but complex steering) or the Easy controller settings (simplified steering but less practical maneuverability).

AC04 was the first Ace Combat game to feature the Return Line. In each mission, crossing the southern edge of the map automatically transports the player onto an allied carrier or airfield, depending on the selected aircraft, fully repairing and rearming the plane. The plane is not repaired in Ace difficulty. The player is also given an option to change special weapons (but not the plane itself) before taking off. The timer of the mission is frozen upon crossing the return line, meaning that it can be exploited for infinite ammunition and instant repairs during difficult dogfights.

Ace Combat 04 is the second Ace Combat game with a split-screen Multiplayer mode, where two players can go head-to-head in a dogfight or a contest for points by destroying air, sea, and ground targets.

Ace Combat 04 features 21 playable aircraft, including the fictional super-plane X-02 Wyvern. Aircraft are unlocked by completing certain missions and purchased between missions by spending credits. Credits are gained by shooting down enemies and achieving high scores on the missions. Unlike in the later games, the player has no control over the planes of their wingmen.

In addition to the machine gun and all-purpose missiles, the player chooses a special munition, specialized either against air or ground targets, to equip their plane with before each mission. What kind of special weapons a plane can carry is determined by its model. One special weapon is always purchased along with the plane, while one to two more can be bought later.

The flagship aircraft of the game is the F-22A Raptor. The super-fighter introduced in this game is X-02 Wyvern, unlocked by earning S rank on all Normal difficulty missions and playing the game twice.

The development of Ace Combat 04 began after the release of Ace Combat 3: Electrosphere between mid-1999 and 2000, and the game was designed from the start to be a PlayStation 2 launch title.[5] The technical upgrades offered by the console's hardware led the Electrosphere staff to view the game as a "return to zero" that was chosen to retain the core dogfighting mechanics of the previous titles, leading the game to be tentatively titled Ace Combat 01 in early design documents to represent its status as a "reboot" of the series.[5][6] The "It's Changing Everything Again" slogan of the game, which was devised by Kazutoki Kono, was directly influenced by their design philosophy.[7] The single-frame Side Story concept was originally conceived by Studio 4°C as a cost-effective means of showcasing the storyline after the large costs of Production I.G.'s animated cutscenes from Ace Combat 3 proved too expensive to be afforded again.[8][9]

An early build of the game, simply titled "Ace Combat 4", was revealed to the public in a teaser trailer released in December 8 during Tokyo Game Show 2000, although the game itself was not officially listed in Namco's planned line-up for the event, which included MotoGP and Tales of Eternia.[10][11] The remaining members from Electrosphere, meanwhile, renamed themselves "AC04 Project" midway through development. A second trailer was released in late March 2001 during the Spring Tokyo Game Show, in which the final "Ace Combat 04" name was revealed.[12] A playable demo was also included in the event.[13]

The Japanese release date of September 13 was announced on July 6.[14] To promote the release of the game, Namco held a special exhibition during the annual Atsugi Air Show at Naval Air Facility Atsugi in late July, where merchandise such as posters and demo discs were given to the public. The promotion also involved the base's "Red Baron" stunt team, which flew aircraft painted with the logos of Namco and Shattered Skies.[15][16] Immediately after Atsugi, the company held a contest where 30 Japanese inhabitants would be given demo copies by expressing their opinion on the game at an special email address, present@acecombat04.com, before the August 5 deadline.[17]

A Japanese TV commercial for the game, scheduled for release on September 12, was postponed in response to the September 11 attacks.[18] The catastrophe forced Namco to alter an image to be published on the official Japanese website of the sinking Tanager battleship of the Aegir Fleet; its smoke was cutting across buildings similar to the Twin Towers in New York. The buildings were instead removed.[19] On the tenth anniversary of the attacks, director Kazutoki Kono commented on his experiences that day and the resulting changes to political considerations in the gaming industry, citing the cancelled commercial and the alterations to the ending of Konami's Metal Gear Solid 2: Sons of Liberty.[20] A demo and trailer were later included in the initial production copies of Soul Calibur II in 2003.[21]

The characters of AC04

Concept art for the characters of AC04

Concept art of Yellow Squadron and a street

Concept art of the Side Story Narrator, Yellow 13, and various civilians

Concept art of Yellow 13, Yellow 4 and a newspaper article

Concept art of the F/A-18C Hornet, the X-02 Wyvern and other aircraft

Retrieved from "https://acecombat.fandom.com/wiki/Ace_Combat_04:_Shattered_Skies?oldid=263892"
Community content is available under CC-BY-SA unless otherwise noted.