watch 03:19
Wiki Targeted (Games)
Do you like this video?
Play Sound

CD-ROM
Ace Combat 2 (Japanese: エースコンバット2 Ēsu Konbatto Tsū) is the second title of the Ace Combat series. It is the fourth title of the series, and the second game of the PlayStation 1 trilogy. In November 2011, a remake, named Ace Combat: Assault Horizon Legacy was released for the Nintendo 3DS portable console.

Ace Combat 2 plays similarly to its predecessor. In gameplay, the player controls a fighter pilot through a number of stages, destroying mission-critical objectives and enemies to continue. As missions are completed, money is earned as a reward, which can be used to buy new aircraft in the "Hangar" screen. The economic reward depends on the number of enemy targets eliminated in a mission. The game features three difficulty levels: Easy, Medium and Hard. Included in the game is the special "Extra mode", which provides several new unlockable aircraft unusable in a normal playthrough.

The game allows the player to fly with a wingman from mission #04A/B. The number of available wingmen is reduced to two: John "Slash" Harvard and Kei "Edge" Nagase. Wingman commands have been significantly upgraded, now featuring the orders "Attack ground targets", "provide cover", "attack aircraft" and "accomplish the mission objective". New aircraft can be bought for both characters, however this option is limited to a handful of missions.

Ace Combat 2 is the first game of the series to include "ace" pilots. Throughout the course of the game, players will be able to fight a number of named enemy pilots, all of which possess better skills than normal enemies. Destroying each ace aircraft will unlock a medal, as well as their paint scheme.

In May 1997, a number of prominent heads of state in the continent of Usea were away on a diplomatic task with an unknown objective, rumored to be about the impact of the Ulysses 1994XF04 asteroid in a year's time. During this period, a high-ranking military corps, codenamed "NA-P2700" staged a coup d'état, rapidly establishing their hegemony over the entire continent. Their quick advancement led them to capture several high-importance areas in each sector, as well as a weapon of mass destruction known as an "Extra Powerful Cruise Missile". As a last measure, the pro-government troops, known as Unified Command, call upon the services of the 92nd Special Tactical Fighter Squadron "Scarface", a group of mercenary fighter pilots led by an ace called Scarface One. With hardware and logistics support, the Scarface Squadron sets out to fight the Usean Rebel Forces and liberate Usea.

With the assistance of the Scarface team, the government forces engage in full combat with the URF, slowly reclaiming various territories across the continent. The mercenaries strike various high-importance parts of the rebel forces' infrastructure, such as air bases, oil refineries and naval ports. During their advance, they engage numerous rebel aces, including a group of ace pilots known only as "Z.O.E.". As well, they engage a number of prototype vehicles controlled by the Usean Rebel Force, such as the Dragonet-class submarine and the massive XB-10 "Big Bad Mama" experimental bomber. After retaking most of Usea, Unified Command launches a large-scale invasion operation to gain strategic superiority. In order to confuse the rebels, the mission is divided into two major operations, "Alphaville" and "Bellissima". The operations end with the destruction of many vital URF targets and sites, granting Unified Command the upper hand in the conflict.

Eventually, the government forces push the remnants of the coup back into their headquarters at the city of St. Ark. Prepared to end the coup d'état once and for all, Scarface Team is dispatched to destroy the surviving rebel forces within the city, as well as their central HQ. The mission ends in success, and St. Ark is freed from the URF. At this point, the story concludes with the Normal ending.

In a hidden mission, Unified Command discovers the existence of a second Dragonet submarine which managed to flee from St. Ark, prompting Scarface to launch in an emergency sortie. They intercept the submarine in the outskirts of the city and sink it. As the ship began sinking, it launched an Extra Powerful Cruise Missile at St. Ark. Should Scarface fail to intercept the missile, the story ends with the Bad ending, wherein St. Ark is annihilated by the weapon.

If the EPCM is destroyed in mission #20, the government forces track down the coup's leaders into a fortress located in the eastern territory of North Point, known as "Intolerance". Scarface Squadron launches in their final mission, laying siege to the fortress. After tearing a hole in Intolerance's central area, Scarface One flies inside into the fortress's core. He destroys an EPCM weapon within, and escapes from the missile silo before the facility is wiped out in a massive explosion. At this point, the game's story closes with the Bonus ending.

The soundtrack of Ace Combat 2 was composed by Tetsukazu Nakanishi, Hiroshi Okubo, Kohta Takahashi, Nobuhide Isayama and Go Shiina. Containing a number of 31 tracks, it is mostly centered on atmospheric rock/electro-rock; however, it also features a number of electronic tracks, such as "Dead End" and "Into The GEO".

The soundtrack was never formally released until August 2010, when it was bundled with the Deluxe Pack of Ace Combat: Joint Assault. In particular, the songs from Ace Combat 2 are used during encounters with the Varcolac Squadron, except during mission #21, wherein original symphonic music from Inon Zur is used instead.

Many aircraft from Air Combat return in the sequel, while also featuring a number of new aircraft, such as the X-29A, the JAS-39C Gripen, and the R-M01. Furthermore, it is the first game of the series to feature original aircraft designs: namely, the ADF-01 FALKEN, the series' first original fighter, the fictional XB-10 bomber and the XFA-27, the first player-controllable original fighter.

In 2005, Namco re-released Ace Combat 2 as part of the NamCollection in Japan for the PlayStation 2, to celebrate the company's 50th anniversary.[1] 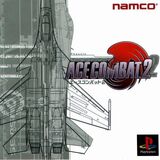 In game image showing gun use.

The "Model Display" showing the ADF-01

The "Model Display" showing the XFA-27

Retrieved from "https://acecombat.fandom.com/wiki/Ace_Combat_2?oldid=266287"
Community content is available under CC-BY-SA unless otherwise noted.