Ace Combat 3: Electrosphere[a] is the third installment in the Ace Combat franchise. It is the only game in the franchise that released in two distinctly separate forms.

The Japanese version of Ace Combat 3 was released in 1999 and had only Japanese audio and text. Its campaign featured 52 missions that were split among different paths depending on in-mission decisions. The story centered around the "Intercorporate War" in 2040 which is later revealed to be a simulation.

The international, localized version of Ace Combat 3 was released in 2000 in specific regions. Its campaign had only 36 of the original 52 missions in a linear fashion with no branching paths. The story, voice acting, and cutscenes were removed and replaced with a more basic story with no voice acting.

The story of the Japanese version of Ace Combat 3 takes place on Strangereal's Usean continent in 2040[5] (sometime between January 1 and July 21).[6] By this time, Usea's national governments have decayed, effectively replaced by multinational corporations, the most powerful being Neucom Incorporated and General Resource Limited.

Sometime in the 2030s, territorial disputes between Neucom and General Resource began to escalate. The peacekeeping Universal Peace Enforcement Organization (UPEO), under the authority of the Neo United Nations, have tried repeatedly to prevent conflict. At the start of the game, Neucom has begun large-scale strikes against General Resource, pushing UPEO to use force to prevent escalation. This results in what is referred to as the Intercorporate War.

There are five distinct endings to the game, entirely dependent on the organizations the player chooses to side with (UPEO, Neucom, General Resource, or a terrorist organization named Ouroboros). After all five endings are completed, the entire conflict is revealed to have been a simulation created by Simon Orestes Cohen to test whether a sublimated character, Abyssal Dision, would be killed. Since the player - controlling an AI that Simon developed - will always kill Dision no matter which ending is attained, Simon is pleased with the simulation and is assumed to release the AI into the real world.

The plot of Ace Combat 3 has been compared to the Ghost in the Shell anime films, Production I.G.'s most famous franchise. Production I.G. was responsible for AC3's in-game cutscenes. Possible references include the subterranean city Geofront and the uploading of a brain/consciousness to a computer (referred to as "sublimation" in Electrosphere and "ghost-dubbing" in GitS). The Geofront may have also been a reference to a location in the Neon Genesis Evangelion.

The game's style is reminiscent of the Wipeout video game series, especially the Head-up display. The logos of UPEO, Neucom, General Resource, and Ouroboros bear resemblance to the works of The Designers Republic.

Namco's later games Ridge Racer V, Ridge Racer 6 and Ridge Racer 7 contain many references to Ace Combat 3 itself, such as billboards with the General Resource and Data Swallow logos; the UPEO, Data Swallow, and Electrosphere logos plastered on various cars; and cars sponsored by Neucom and General Resource. In the case of the latter in RR7, they also specialize in nitrous.

The story in the international version of Ace Combat 3 is independent of the Japanese version, with none of its characters, backstory, or endings. Neucom was renamed to Neuwork. However, some portions of the story from the Japanese version were included here.

In this version of the game, Neuwork and General Resource are still at odds and UPEO still attempts to maintain peace between the two companies. The player is a human pilot for UPEO and works throughout most of the game to prevent Neuwork from trespassing on General Resource's territory. Later on, the player discovers that Ouroboros had masterminded everything through their leader, an AI named Aurora. The player hunts down Aurora and helps destroy Ouroboros to bring back peace to the continent.

Ace Combat 3 plays in a similar manner to its predecessors, but with several additions that would become staples of the series. The camera can be rotated in a 360° range around the player, and a large assortment of weapons, including guns and main missiles, can be chosen freely before each mission. Wingmen cannot be selected, but are instead dictated by the story. Missions combined radio chatter from both allies and enemies to expand the narrative.

Ace Combat 3 is notably the only game in the series that featured a mission set in outer space, complete with a different physics model on the handling of aircraft in a zero-gravity situation.

The Japanese version elaborates on the mission branching mechanics of Ace Combat 2 by allowing the player to join one of four factions through the story. Specific missions gave the player the ability to decide on remaining with one faction or switching to another. The Clear Rank system was expanded upon, where D ranks are specifically earned by failing the mission's main objective but do not require the mission to be restarted. In addition, certain circumstances unlocked hidden missions to be played, similar to AC2.

The original Japanese version of Ace Combat 3: Electrosphere was released on May 27, 1999. It contained 52 missions, fully animated cutscenes, multiple story branches, and five distinct endings. It was packaged into two CDs: the first CD contained the UPEO and General Resource missions; the second CD contained the Neucom and Ouroboros missions. Supplementary materials included the Mission & World View Guide Book and Mission 00. All Japanese copies of the game also included the Photosphere booklet.

The Japanese version of Ace Combat 3 received a budget re-release under PlayStation's The Best range on December 7, 2000.[7]

"I've only worked on a handful of titles. I ... was supposed to do Ace Combat 3 but the project was canned after 1 demo scene"
― Agness Kaku on her video game translation work[8]

"I was brought in to do a demo translation of a story chapter by people who were supposedly contracted to write the screenplay. Soon after, Namco decided to lighten the budget by ditching much or all of the plot content for the non-Japanese release."
― Angess Kaku on the localization for Ace Combat 3[9]

The international version of the game was released on a single CD in 2000: on January 21 in PAL regions[3] and on March 3 in the United States.[3][4] The localization of the game was subcontracted to the Japanese company Frognation, who contacted the veteran translator Agness Kaku and produced several demo voice-over clips. Early in the localization process, Namco suddenly cut its funding and removed most of the game's story.[9][10]

There has never been an official reason stated by Namco, Frognation, or Agness Kaku on why the funding was cut. It is believed that a lack of sales led to Namco's decision. Air Combat had sold over 2.2 million copies, but Ace Combat 2 only sold a little over 1 million copies.[11] By comparison, the Japanese version of Ace Combat 3 had a much larger story with many more cutscenes and voice-acted lines than Air Combat and Ace Combat 2 combined, as well as a higher total mission count. Including the international versions, Ace Combat 3 sold a little over 1.1 million copies. Namco may have expected much larger sales figures for the game, resulting in their decision to halt the full localization of the game.

Namco made their decision after they had already started advertising the game's expansive storyline in regions outside of Japan, resulting in backlash from fans of the series who were expecting the game's full localization.[10] Despite this, the international version still received positive critical reception upon its release.[4]

Due to the international version's lack of a proper storyline, Ace Combat fans have repeatedly asked Namco over the years to re-release or remake Ace Combat 3 with full localization. However, Namco has repeatedly denied such requests.

When asked by GameDaily in 2006 about a possibility of remaking Ace Combat 3, Naoto Maeda said: "As far as a re-make of Ace Combat 3 is concerned, we have no plans to do this at this time. The development team is aware that there are a lot of fans out there that really loved Ace Combat 3. If enough voices calling for a re-make were gathered and various issues could be resolved, then I think it might be worth it."[12]

Kazutoki Kono, head of Project Aces, was asked by a fan during an Ace Combat Infinity signing event in 2014 about Ace Combat 3 and a potential remake. Kono explained that the team was too small to support the massive localization that Ace Combat 3 required, and if it were to happen, it would be more difficult than re-releasing Ace Combat 04, Ace Combat 5, and Ace Combat Zero combined.[13]

In June 2009,[14] a fan-driven project was initiated by a group of people known as "Team NEMO" in order to fully translate Ace Combat 3.

The first draft of all in-mission scripts translated into English was published in August 2010.[15] After bringing on programmers to inject the translations into the game, the first demo of a translation patch was released in December 2014.[16]

Unlike any other game in the Ace Combat franchise (excluding Ace Combat Advance), Ace Combat 3 features exclusively original fictional aircraft. A majority of them are based on real designs, such as the F-22C Raptor II (based on the F-22A Raptor) and the EF-2000E Typhoon II (based on the Typhoon). There are also many aircraft whose designs were completely fictional such as the R-101 Delphinus #1, X-49 Night Raven, UI-4054 Aurora, and more.

In both versions of the game, new aircraft are only unlocked after completing certain campaign missions. Unlike other Ace Combat games, aircraft are immediately available once they're unlocked; there is no credits system. In the Japanese version of the game, aircraft are further restricted by the organization the player is affiliated with at that time. For example, the player can only fly Neucom aircraft when allied with Neucom.

In addition to selecting an aircraft before each mission, the player can swap out their standard missiles and guns. The specific weapons available depend on the aircraft being used. However, unlike Ace Combat 2 before it, the player cannot change their wingmen's aircraft or armaments. 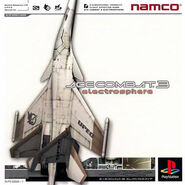 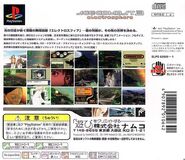 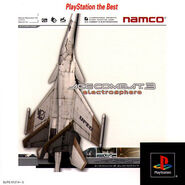 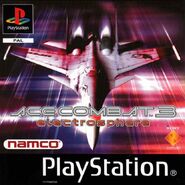 PAL (Front)
Add a photo to this gallery

Title card in the Japanese version