"When history witnesses a great change, Razgriz reveals itself... first, as a dark demon. As a demon, it uses its power to rain death upon the land, and then it dies. However, after a period of slumber, Razgriz returns..."
― Albert Gennette, quoting A Blue Dove for the Princess

Ace Combat 5: The Unsung War (エースコンバット5 ジ・アンサング・ウォー Ēsu Konbatto faibu Ji Ansangu Wō, or Ace Combat: Squadron Leader in PAL regions) is the fifth installment in the Ace Combat franchise. It was released in 2004 exclusively on the PlayStation 2.

The game's single-player campaign takes place in Strangereal in 2010. The player takes control of Blaze, a rookie Osean Air Defense Force pilot in the Wardog Squadron, who gets caught up in the Circum-Pacific War between Osea and Yuktobania. Amidst the conflict, Blaze and his wingmen unintentionally fulfill the Razgriz prophecy and uncover a conspiracy pulling the strings behind the war.

Ace Combat 5 is one of the most expansive Ace Combat games, featuring more playable aircraft and campaign missions than most other installments, three controllable wingmen in most missions, and a large number of fully-animated cutscenes. The game received the second-highest aggregate review scores (behind Ace Combat 04: Shattered Skies) and the third-highest sales figures (behind Ace Combat 04 and Air Combat).

pencil
We've still got some work for you, too, so don't slack off now.
This article or section is a stub. You can help by expanding it.
Main article: Circum-Pacific War

During the course of the game, the player has the opportunity to purchase 53 different aircraft, ranging from real-life aircraft to prototypes and fictional aircraft. Most of the aircraft are grouped into "families", where the more advanced variants of a particular craft are unlocked after earning a certain amount of experience with the less advanced variants.

All aircraft feature alternate paint schemes, which can be acquired by progressing through the story or shooting down hidden Ace pilots. There are a total of 32 missions in the campaign mode, but due to varying paths the player can take in the story, only 29 of these are completed in a single campaign.

As with other entries in the Ace Combat series, once the mission objectives are complete, the player is awarded with money for purchasing aircraft, as well as additional money for performing above and beyond the requirements of the mission. Bonus money can be earned by completing landing or mid-air refueling sections quickly. Unlike other entries, the player does not have to purchase special weapons, as each aircraft only has one special weapon which is provided upon purchasing the aircraft.

From easiest to most difficult, the settings are Very Easy, Easy, Normal, Hard, Expert, and Ace. On the hardest two difficulty levels (which cannot be played until the next-easiest difficulty on the list is completed), even a single missile from the enemy will destroy the player's airplane, whereas on Very Easy it takes several missiles.

During missions, the player can issue orders to their wingmen through the DUALSHOCK2's D-pad. Commands include engaging enemies directly in front, directly attacking the player, or to engage at will. When the latter option is enabled, the wingmen will focus primarily on their aircraft role; for example, if a wingman is flying an Attacker, they will focus their attention on ground targets. (This was changed in Ace Combat Zero: The Belkan War, where the player has direct control over what targets the wingman fires upon when engaging at will.)

In a similar fashion, the left and right D-pad buttons also allow the player to respond "Yes" or "No" to dialogue prompts within the missions. Usually, these serve no purpose to the game besides adding additional story elements, though some missions do rely on this system for how the mission will play out or even what mission will play next.

The Ace Combat 5: The Unsung War Original Soundtrack was produced and partly composed by Keiki Kobayashi, who previously worked on Ace Combat 04: Shattered Skies. Other composers for the Ace Combat 5 soundtrack include Tetsukazu Nakanishi (who also produced the game's sound effects), Hiroshi Okubo, and Junichi Nakatsuru.

In a first for the Ace Combat series, Ace Combat 5 features a licensed song, Blurry by Puddle of Mudd, which is used and referred to as one of the game's main themes. Other major songs include The Journey Home, The Unsung War, and a remix of Blue Skies.

Ace Combat 5 also features an "arcade mode" separate from the main story. This gameplay mode, named Operation Katina, continues the story of Ace Combat 04 and allows the player to fly as Mobius 1 again to fight the new threat of Free Erusea.

The player's objective is to fly through a number of relatively short missions and defeat a certain number of enemies before the timer runs out in order to advance. In a similar fashion to arcade games (where the series has its roots), the player can achieve high scores by completing each mission as fast as possible; destroying enemies will add time to the clock. The missions get more difficult as the player progresses; however, akin to the dialogue prompts that have limited control on what missions will play during the campaign, the player has some control over the difficulty of the missions through a branching tree. Missions at the top of the tree are easier, whereas missions at the bottom of the tree are challenging.

In contrast to the gameplay mechanics of any other entry in the series, Arcade Mode restricts the player to very low ammo on missiles and special weapons (machine guns are unlimited). Wasting ammunition, especially on more difficult missions, can be extremely dangerous. Throughout the various missions, special enemy targets can be destroyed that will award the player with extra missiles or special weapons - they are identified by an "M" or "S" after their name, respectively. For example, an enemy named "MiG-21 S" is a MiG-21bis that will award the player with additional special weapon ammo.

The game received generally high praise and garnered both critically positive reception and a strong response from the playerbase. The aggregate website Metacritic gives the game a critic score of 84 based on 57 critics, which is considered "Generally favorable reviews", and a user score of 8.9 based on 92 reviews, which is also considered "Generally favorable reviews". IGN gave the game a score of 9.3 and praised its graphics, presentation, gameplay and score, but criticized the voice acting. GameSpot rated the game at an 8.3 and commended the game's presentation, variety of aircraft that you can fly, and the story, while noting the absence of multiplayer and unrealistic elements of the gameplay as drawbacks.

Game Informer ranked Ace Combat 5 as their 298th best game of all time. 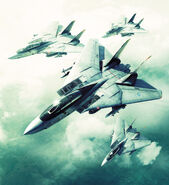 Japanese Guide
Add a photo to this gallery

Retrieved from "https://acecombat.fandom.com/wiki/Ace_Combat_5:_The_Unsung_War?oldid=266284"
Community content is available under CC-BY-SA unless otherwise noted.