The Ace Combat wiki that anyone can edit! Nothing Else Comes Close.

Gracemeria is the capital of the Republic of Emmeria, a leading economic and military power in the Strangereal universe. The city is a highly developed metropolis and one of the most prosperous cities on the entire Anean continent. During the Emmeria-Estovakia War, the city was occupied by Estovakia and saw multiple battles. Historically, Gracemeria was a fertile region that saw many Emmerian nobles fighting for the territory. It later became Emmeria's capital after King Aurelius II united the nation and transitioned it from a monarchy to a republic. (read more...)
What is Ace Combat? 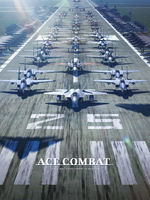 Ace Combat is a video game series, running for 26 years, where the player takes control of fictional pilots who are caught up in the winds of war. Typically, the story progresses in such a way that the player character becomes the most powerful of all of their allied forces, and is considered a legend by the end of the game.

Most gameplay in Ace Combat involves the direct control of aircraft, where players will attack or defend from enemy forces in the air, on the ground, and in the sea. The games are also well-known for their massive superweapon battles, which border on the line of fantasy involving massive chemical lasers or large anti-asteroid railguns.

How to Help
Want to help us out? Anyone and everyone can edit Acepedia!
Discord Server
Chat with fellow wiki editors in the Acepedia Discord server!
Join Now
Social Media
facebooktwitteryoutube
Featured Blog Posts

15 Years Ago, There Was a Wiki

Read Full Post
Read more...
On This Day — May 19
Strangereal

Dates are in UTC • View all
Español Français Português do Brasil Русский 中文
Community content is available under CC-BY-SA unless otherwise noted.
Advertisement