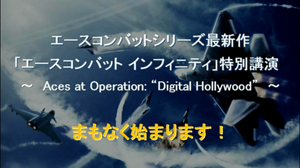 Aces at Operation: "Digital Hollywood" was a lecture hosted on March 1, 2014 at Digital Hollywood University's Surugadai Campus in Ochanomizu, Tokyo. The lecture was primarily focused on Ace Combat Infinity and the history of the Ace Combat franchise. Infinity producer Kazutoki Kono, composer Keiki Kobayashi, and writer Kosuke Itomi presented the lecture and Kobayashi performed live music for the audience.

On the subject of Infinity, Kono revealed that the number of participants and feedback entries during the international beta test was more than double what they were expected. He mentioned the following improvements for the game:[1]

After discussing the game, Kono played a video containing the three beta trailers in Japanese. After that, Kono played a slideshow of various Infinity development images, among them the red Aigaion and a portrait of Nagase as well as some goofy shots of the developers themselves.[1]

Kobayashi then took the stage, talking briefly about his role on the series before introducing three other musicians—violinist Yukari Nakamura, violist Mariko Takei, and guitarist Takanori Goto—who accompanied him on piano to play "ISAF", "Zero" and "The Journey Home" live for the audience.[1] Partway through "Zero", Kobayashi instructed the audience to clap through the rest.[2]

Following the live performance, Itomi introduced himself as the art director for Ace Combat Zero: The Belkan War and told the story behind developing the song "Zero". He explained that the orchestral style of music present in Ace Combat 5: The Unsung War suited that game since the player was "a protagonist involved in a huge war", but it didn't suit the ending of Ace Combat Zero since it was a duel. Instead, Itomi wanted to invoke elements of "Macaroni Western" films. However, when he presented the idea to Kobayashi at the time, the latter stated, "How is flamenco supposed to fit in a fighter game!" Itomi persisted and Kobayashi ended up composing "Zero". On stage, Kobayashi laughed at the story and Kono said, "It's amazing because you still managed to produce the song."[1]

Kobayashi and the guitarist then performed some improv while Kono got the screen back on to show some more information.[2]

By the time the livestream ended, 20,000 people had opened the page and over 9,000 comments were posted.

On March 3, 2014, Project Aces announced a contest through Twitter. From March 3 to March 14, Twitter users who live in Japan who followed the Project Aces Twitter account and retweeted their tweet announcing the contest would be entered in a drawing to win the sole copy of the sheet music that Kobayashi created of the music that he played during the conference. The winner is to be selected at random starting on March 17, and must respond to instructions provided through Direct Messages.[3] 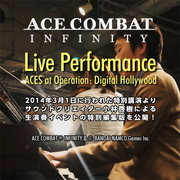 From left to right: Viper, Goodfellow, Omega and Nagase

A screenshot of Test Flight

A developer with his screen blurred out

Notes on a whiteboard

A desk with an object blurred out

A representation of the Aircraft Tree

A flyer for Ace Combat Infinity with a section blurred out

A developer exclaiming at a screen that has been blurred out

A list of Challenges, a previously-unknown feature of Ace Combat Infinity

A screenshot of searching for rooms in Ace Combat Infinity

A paper with renders of a single Stonehenge railgun

Various sketches of the OLDS

Retrieved from "https://acecombat.fandom.com/wiki/Aces_at_Operation:_%22Digital_Hollywood%22?oldid=263379"
Community content is available under CC-BY-SA unless otherwise noted.