XSAMs have appeared in nearly every Ace Combat game. 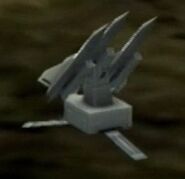 A Usean Rebel Forces SAM
Add a photo to this gallery

Retrieved from "https://acecombat.fandom.com/wiki/Advanced_Surface-to-Air_Missile?oldid=255511"
Community content is available under CC-BY-SA unless otherwise noted.