Start a Wiki
watch 01:51
The Loop (Games)
Do you like this video?
pencil
All right, gentlemen, it's time to clean house!
This article or section may require a cleanup to meet Acepedia's quality standards.

For other uses of "Aigaion", see the Aigaion disambiguation article.

"What the hell is that?! They're launching fighters off that huge ship!"
― Freddie Durand during the assault on the Aerial Fleet 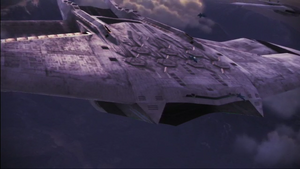 During the Estovakian Civil War, Gustav Dvornik conceived the P-1112 Aigaion and the Aerial Fleet in order to bring a quick victory to the Eastern Faction. Lorenz Riedel and several other Belkan refugees assisted Dvornik and the Eastern Faction in developing the cruiser,[1] which - along with her sister warships, the P-1113 Kottos and P-1114 Gyges - ultimately helped the Eastern Faction win the war.

The P-1112 Aigaion was later used to spearhead the initial Estovakian assault during the opening stages of the Emmeria-Estovakia War.[2] It would later attack Emmerian forces repeatedly throughout their counterattack; by firing Nimbus missiles[3] and launching the Strigon Team to engage directly in battle, the Aigaion was a consistent thorn in the Emmerians' side.

In late February 2016, Emmeria launched a multi-part operation to destroy the Aigaion and the rest of the Aerial Fleet. The Emmerian military first captured the city of San Loma in order to use its airfield for air operations; then, using intelligence gathered about the Aigaion's refueling process, the Republic of Emmeria Air Force engaged the fleet over the Glava Islands in the Dead Sea south of Anea. The efforts of all pilots contributed to its downfall, but Talisman was the one to strike the final blow to the Aigaion's cockpit and core and fully destroy it.[4]

The Aigaion and its aerial fleet

The Aigaion preparing to fire its cruise missiles

The cruiser's hangar
Add a photo to this gallery

The Aigaion series was developed by an unknown nation in the 2000s after the Ulysses Disaster. The purpose of the heavy command cruisers was to build a singular mobile assault system capable of projecting aerial power at long distances with low maintenance costs, making their operations more practical in comparison to conventional air forces in terms of cost-effectivity in the wake of the global military budget reductions triggered by the Ulysses impacts.

The original model was completed at some point in the early 21st century, proving successful enough to warrant the development of advanced models identified by a colored upper fuselage; a red-plated model with increased firepower and a golden experimental variant armed with point defense laser. Aigaions often operated with two pairs of smaller Kottos and Gyges cruisers providing escort as a unified "aerial fleet", and were universally identified by the name of their class.

Between 2019 and 2020, the Aigaion line was seized by militants from the Federation of USEA during Kacper Cohen's insurrection, becoming major strategic assets of the Usean air force.

In August 2019, a lone Aigaion was deployed during Operation Override to counter the United Nations forces besieging Tokyo by deploying a CFA-44 Nosferatu manned by Camilla and her MQ-90L escorts. After Carmilla's unit was shot down, the ship was pursued and shot down by Reaper of Arrows Air Defense and Security in a battle high in the skies of the city after having its guns and engines disabled. The ship was called "Moby Dick" by Viper after the whale from the eponymous novel by Herman Melville in reference to its gargantuan size.

Following the liberation of Tokyo, Aigaions operating at the helm of aerial fleets were deployed across Europe and Asia to bolster USEA air power during the conflict. The ships became priority targets of the UNF during Operation Eternal Liberation as part of individual missions named "Operation Whale Hunt", who offered major payments to mercenaries for the successful destruction of each aircraft and their escorts.

Retrieved from "https://acecombat.fandom.com/wiki/Aigaion-class_heavy_command_cruiser?oldid=242371"
Community content is available under CC-BY-SA unless otherwise noted.