AD 200X...
The Cold War collapses. The new world order is shaped by economic power. The only weapons are consumer products. They have no political or military significance. But the world economy grows so rapidly that a great power emerges with every military weapon. To advance its selfish interests the country aims its arsenal against its neighbors. Day after day conflict intensifies. Finally, UN forces are ordered to attack.

As Falcon 1, the player controls a F-16C Fighting Falcon, and has to shoot down 6 enemy aircraft within a time limit.

There are three difficulties in the game: Cadet, Captain, and Ace.

In Ace difficulty, all hostile aircraft will use countermeasures to defeat incoming missiles, therefore player must use the gun to take them down. Once all 6 of them are shot down, the player is given the opportunity to land on an aircraft carrier. If successful, an extra mission comes in, where the player has to shoot down a red Flanker within 1 minute. 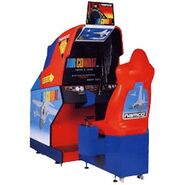 Arcade cabinet setup
Add a photo to this gallery

Retrieved from "https://acecombat.fandom.com/wiki/Air_Combat_(arcade)?oldid=251909"
Community content is available under CC-BY-SA unless otherwise noted.