The Aircraft Tree is a hierarchical technology tree featured in Ace Combat Infinity and Ace Combat 7: Skies Unknown. When the player first begins, they're given a basic aircraft and a single tuning part at the earliest tier. The player can then advance on the tree by playing the game to unlock more powerful aircraft and parts.

The term tree refers to the player's ability to choose which sequence, or branch, to advance. Completing all branches is not mandatory; it is entirely the player's choice which branches to advance depending on what aircraft or parts the player wishes to unlock.

Exclusive to Ace Combat Infinity, the player could not purchase an aircraft or part without first filling up its research gauge. A technology's research gauge would only be available upon unlocking it from any prerequisite branch. For example, all aircraft branching out from the starting aircraft, the F-4E Phantom II, began researching at the start of the game since the F-4E was already provided. Every online sortie filled up the research gauges depending on certain factors:

camera
Before the two planes take off, capture both of them in one shot. Got it?
This article or section may require more images or images of better quality.

1 of 14
The following two diagrams are the first and last iterations of the Aircraft Tree in Ace Combat Infinity. See each image's details or view this page on desktop to see all intermediate iterations. 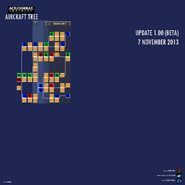 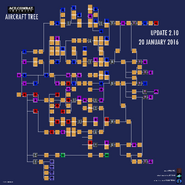