watch 02:45
Wiki Targeted (Games)
Do you like this video?
Play Sound
footnote
This article or section needs additional citations for verification.
Please help improve this article by adding citations to reliable sources.
Unsourced material may be challenged and removed.

Colonel Andrei Markov[a] is the main antagonist of Ace Combat: Assault Horizon. Markov is a former, decorated pilot of the Russian Air Force. He always flies an aircraft painted with a distinctive design of a shark's mouth, earning him the nickname and call-sign Akula.[b]

In retaliation for the death of his wife, Krista Yoslav, during a NATO bombing raid, Markov swore revenge against NATO and especially the United States of America. He left the Russian military to form a rebellion group with the purpose of developing and using a massive super-weapon against the United States.

In January 2016, Markov attempted to drop the super-weapon onto the White House in a final act of vengeance, but Lieutenant Colonel William Bishop killed him and destroyed the weapon before it could cause any major damage.

Markov, now flying a PAK-FA equipped with the final Trinity missile, led an assault on Miami (just as Bishop's dream had predicted a month prior) and personally entered the battle zone, attempting to shoot down Bishop. Gutierrez, however, flew in front of Bishop and took the missile, being forced to bail out after Bishop used his cannon to help blow Guts' canopy. Markov and Bishop then attacked each other head-on before parting ways temporarily to refuel, Markov flying directly into Hurricane Alex.[11]

The hurricane provided cover for Markov and another bomber squadron as communications and radar were hampered by interference from the storm. Illich, meanwhile, distracted Warwolf Squadron from chasing down Markov long enough for him to disappear as he made his way to Washington, D.C.[12] Markov instructed his remaining allies to perform suicidal attacks on Washington's anti-air defenses, including the USS Anzio and SAM batteries, to give him room to fly in and drop Trinity on the White House (having been damaged over Miami, preventing a missile launch). Bishop pursued him throughout the airspace, eventually shooting him down and killing him, but not before he managed to let go of Trinity. Bishop swiftly destroyed it over the nearby river before it could cause any damage, ending the conflict and leaving Markov's death in vain.[2]

In combat, he wore a black flight suit, contrasting with the blue worn by Sergei Illich and the olive drab worn by other pilots.

It is unknown what he was like before Bosnia. However, Krista's death would take a severe toll on him, for the event turned him into a cold and calculating individual. During combat, he would often taunt Bishop, whom he saw as a worthy opponent (albeit not initially) while making sarcastic comments on both him and Gutierrez. Throughout the events of the New Russian Federation coup d'état, his primary objective was to carry out his revenge on the United States to avenge his wife's death and did not show any loyalty towards the Russian Federation, putting his personal task before anything else.

He would go as far as to manipulate the remnants of the NRF to fly with him to the U.S. and betray Stagleishov when he decided to end the coup, showing that he was not someone to be trusted. He was not above betraying his allies if it suited his purpose. He even instructed several of his Russian pilots to mercilessly conduct kamikaze attacks on various targets in Washington D.C. so he can destroy it himself using the last Trinity warhead, all while sending a group of six Tu-160 Blackjack bombers to bombard the air defenses over Woodrow Wilson Bridge. He also has a tendency to fly ruthlessly when using the Pugachev's Cobra to attack Bishop and even destroying F-15C jets over Hurricane Alex in North Carolina as well as F-16C jets over Washington D.C., not caring for anyone trying to save lives.

Though he is a skilled pilot, he was willing to die in success when he decided to break off his attack on Bishop so he can launch the remaining Trinity warhead on the White House just as his aircraft began to suffer external damage. However, Bishop realized this and destroyed the warhead, leaving his ultimate goal to fail in vain.

The Su-35S Flanker-E, one of Markov's signature aircraft 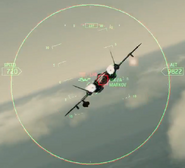 Retrieved from "https://acecombat.fandom.com/wiki/Andrei_Markov?oldid=263754"
Community content is available under CC-BY-SA unless otherwise noted.