For other uses of Area B7R, see Area B7R.
This article is about an in-game mission. For the in-universe event, see Operation Battle Axe.

Shoot down the Butterfly Master.

Goodfellow: All right. Time to start the briefing. We've spotted an enemy fighter squadron taking off from South America. They're flying toward U.S. territory. We'll be scrambling from our San Diego base to intercept. You will meet in Area B7R in the Nevada wastelands. It's mostly flat and dotted with circular ridges. The area's codenamed "Round Table" by the USAF, which uses it as a proving ground for testing special-purpose aircraft. Due to radio interference from the mineral resources buried underground, communications on this op will be hard. If you have to bail out, you're going to have trouble contacting rescue. It'll likely take several days to track you down. So keep that in mind...Omega. You'll likely have a pretty ferocious firefight with the enemy squadron. We have some time before deployment. Make sure your craft's fully prepared for combat.

Achieving an S Rank in this mission requires earning 35,000 points or more upon destruction of the QFA-44 at the end. Time is not a factor on the S Rank, so the best way for the player to earn those points is by destroying all possible aircraft in the first stage as well as all possible UAVs in the last stage.

Goodfellow: Following interrogation of our POWs, we uncovered several facts about the Butterfly Master's ID. He pilots the QFA-44 Carmilla, a new type of unmanned craft. Its hardware remains a mystery, but its capabilities are superior to the Quox. We've confirmed that it uses a low-orbit communications satellite network to handle the transmission of navigational data. Taking out the satellites would solve our problem quickly, but the space treaty we've signed with the UN prevents that. I'm sure the UN will try to enact some measure or another to deal with that, but a lot of countries, particularly in South America, are dead set against any meddling with that treaty. It's going to take some time. Those politicians are trapped by the very rules they enacted. 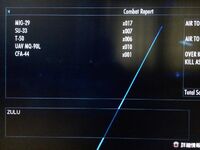 Retrieved from "https://acecombat.fandom.com/wiki/Area_B7R_(Campaign)?oldid=267003"
Community content is available under CC-BY-SA unless otherwise noted.