The Arkbird (アークバード Ākubādo) is a spacecraft built by the Osean Federation during the Cold War as an ICBM and asteroid interception weapon. It was the replacement of the Stonehenge built in Usea.

During the Cold War, the arms race between Osea and Yuktobania was marked by the constant evolution of long-range ballistic missiles and missile interceptor systems. In response to the growing threat, Osea developed SBL (Satellite-Based Laser) and ASAT (Anti-Satellite Laser) energy weapons to destroy hostile missiles in flight. However, the fears of increasingly stealthy attack submarines prompted the Osean Department of Defense to submit plans for a "Maneuverable Orbiting Spacecraft" under the Strategic Defense Initiative (SDI), paving the way for the construction of the Arkbird.

Despite the global situation, the concept remained unrealized until the Ulysses 1994XF04 impact in 1999, which brought the Cold War to an end. Osea and Yuktobania abandoned their goal of military supremacy and built the Arkbird to engage asteroid fragments lingering on the atmosphere. The ship used energy weapons made in both countries, including a ventral beam laser system made in Yuktobania. Years after the Ulysses disaster, it succeeded in clearing 80% of the atmospheric debris.

The Arkbird was later considered as a base for further spacecraft developments and the construction of an international space station. In 2008, it was the site of the G7 Summit, which included several heads of state from Osea and Usea, where the Comprehensive Nuclear Test Ban Treaty and START 2 were signed.

In 2010, the Osean military authorized the deployment of the Arkbird in the Circum-Pacific War on September 29 in response to the Scinfaxi submarine's sinking of two aircraft carriers, the Vulture and the Buzzard, at the Eaglin Straits. The Basset Space Center used its mass driver to send an SSTO craft loaded with an A-SAT laser module to the ship on October 3, a plan nearly halted by a Yuktobanian aerial attack on the base.

The following day, the Arkbird was deployed during a Yuke amphibious attack on Sand Island to stop the Scinfaxi from attack Osean aircraft with ballistic missiles. The submarine was pierced by the laser, causing it to lose its submerging capability and leading to its destruction at the hands of the Wardog Squadron. Some time after the Sand Island incident, the Arkbird was disabled by an SSTO shipment loaded with explosives. Between October and December, the spacecraft was seized by Belkan operatives, who installed combat drone launchers on the hull of the ship.

Towards the end of the year, a V1 nuclear weapon stolen from Mount Schirm was loaded on the ship, which the Gray Men planned to detonate on the Yuktobanian city of Okchabursk to escalate the war. On December 24, the Andromeda intelligence vessel intercepted a Belkan message signaling the start of the attack. Under direct authorization from Vincent Harling, the Wardog Squadron, acting as the "Ghosts of Razgriz", launched from Kirwin Island and intercepted the Arkbird over the Ceres Ocean.

The Arkbird is a large space-borne craft, with a sweeping aerodynamic design. It has a vaguely triangular shape, with the fuselage gradually widening and flattening as it goes rearwards. The central fuselage houses a fast firing laser unit on a circular mounting on the dorsal section, with AAM launchers flanking it. UCAV launch units and another more powerful laser are fitted on the ventral section. Upwards sweeping wings reminiscent of bird's wings complement the design, and provide most of the craft's maneuvering capabilities. The Arkbird has at least six main engines, four in two mountings on each side on the ventral rear, two large combined cycle engines on the dorsal rear and with one large auxiliary engine in the center of the dorsal fuselage section.

The Arkbird is featured in the mobile game Ace Combat: Northern Wings. In the game's plot, it is revealed that the Kingdom of Nordennavic secretly supported the development of the Arkbird. In addition, the ship makes a few appearances in gameplay itself.

In the Osean campaign, Grendel 1 assumes control of the A-SAT cannon to attack the invading Yuktobanian fleet during the siege of Sand Island. Later on, the Grendel unit chases the Belkan-controlled Arkbird during the attack on Okchabursk (in the events of "White Bird (Part II)" in The Unsung War), and attacks it together with the Ghosts of Razgriz, in a clear contradiction of established canon. 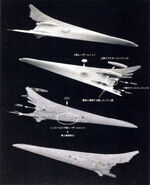 The Arkbird as seen in Ace Combat: Northern Wings.

The Osean astronaut and his capsule over the Ceres Ocean. On the horizon can be seen the place where the Arkbird crashed.
Add a photo to this gallery
Retrieved from "https://acecombat.fandom.com/wiki/Arkbird?oldid=96158"
Community content is available under CC-BY-SA unless otherwise noted.