For the dam from the Infinity universe, see Avalon Dam, Russia.

"Initiate anti-air fire! Light up the sky with flames!
Show him what Avalon is all about!"
― A World With No Boundaries soldier[2]

Avalon Dam is a massive hydroelectric dam and missile silo complex located in Mund Valley in central Belka. At the end of December 1995, Avalon Dam became the site of the decisive final engagement between the Allied Forces and the rebel organization A World With No Boundaries.

Avalon Dam spans Mund Valley in the rugged, mountainous region east of the Waldreich Mountains in central Belka. The dam itself is divided into ten main sections, each housing 52 sluice gates; it retains approximately 92 billion cubic meters of water, and its hydroelectric turbines generate up to 2.1 kilowatts of power per minute.[3] The dam's numerous spillways extend several hundred meters away from its south face; two intake towers positioned at both ends of the dam's north side feed water from Avalon's reservoir into its turbine generators.[2]

Avalon's missile silo facility—measuring 10 kilometers long, 200 meters wide, and 120 meters in depth[4]—extended beneath the dam's reservoir lake. The length of the facility is comprised of three subsections, which approximately follow the reservoir valley's natural topography. Each subsection housed subterranean missile silos and a module that controlled the missile-launch protocols. The subsections and control modules were protected by shutter doors and linked by two railway tunnels, which ran parallel to one another along the length of the facility.[2]

Avalon Dam was constructed near the end of the Cold War by the Belkan Federation, likely as a result of the era's ongoing arms race. Its construction lasted for eight years and ended sometime after Belka's Federal Law Review in 1988. The project was initially promoted as a major civil-works project and received both technical assistance and funding from international partners.[5]

However, the Belkan government's refusal to disclose the necessity of Avalon's "multipurpose" silo raised numerous objections throughout the construction process. All opposition towards the project ultimately ended with the public opening of the dam, which was hailed as a symbol of Belka's strength.[3]

Sometime in late 1995, Anton Kupchenko and his "A World With No Boundaries" army seized control of Avalon and acquired the single V2 warhead stored inside it. The coup d’état forces proceeded to drain the reservoir lake, thereby exposing the silo facility in preparation to launch the weapon. On December 31, Allied fighter squadrons, supported by Galm Team, flew through Mund Valley and attacked the Avalon facility. The mercenary ace Cipher successfully flew into Avalon's subterranean tunnel system and destroyed the facility's launch-control modules.[2] Following the rebels' final defeat, Avalon's reservoir lake was refilled, flooding the launch site; the silos beneath its waters are presumed inoperable and decommissioned.[6]

Avalon Dam concept art from Aces At War: A History 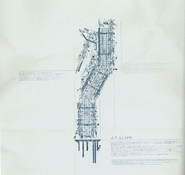 Blueprints of the Avalon facility

View of the dam's south face

A view of the tunnels that link Avalon's control modules

The interior of Avalon; an open shutter is visible in the upper right
Add a photo to this gallery

Retrieved from "https://acecombat.fandom.com/wiki/Avalon_Dam,_Belka?oldid=247209"
Community content is available under CC-BY-SA unless otherwise noted.