is a Special Aircraft featuring the livery of the B-1B Lancer used by Razor Squadron, a squadron from Task Force 108 specialized for bombing runs. 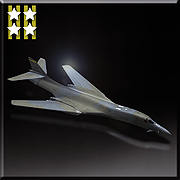 "A special version of the B-1B aircraft based on a bomber belonging to the 108th Task Force. Along with improved acceleration, it has been modified to provide excellent turning capabilities while flying low at high speeds which allows it to cut through enemy radar networks and strike at targets as quickly as possible. The 108th Take Force conducted an investigation into a new type of bomb being developed by anti-government forces, eventually implementing a bomber raid against a missile base, but that too was only a part of larger events. The pilot of the aircraft on which this is based on was a tough and strong woman, and as well as flying a bomber she also commanded a gunship during mountain skirmishes."
― Hangar

Nickname
Upgrading this aircraft to Level 20 unlocked the Cooking Time nickname for use at any time.

Retrieved from "https://acecombat.fandom.com/wiki/B-1B_-Razor-?oldid=224918"
Community content is available under CC-BY-SA unless otherwise noted.