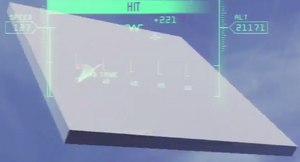 "The Bacura are approaching."
― Project Aces

The Bacura are mysterious units that appear as large, spinning rectangles floating in mid-air. They were added to Ace Combat Infinity in June 2014, and can spawn over Tokyo Martial Law and its HARD variant.

When the Bacura appear, at least 11 individual units spawn at 20,000 feet or higher. They only have a chance to spawn after the Mission Update in Tokyo or Tokyo (HARD) is completed. Their spawn point is to the north and center of the combat area. Because of their high altitude, players focusing on ground attack may not notice the Bacura at all. They remain until the end of the mission, at which point they begin to fly towards space at a relatively slow speed.

The Bacura cannot be targeted or locked onto, so all weapons fired at them will be unguided. Because of their spinning, high-speed projectiles like missiles or Rocket Launchers may not land a hit. The most reliable weapon to hit Bacura with is the machine gun and Machine Gun Pods. However, no matter what weapons are used or how much damage they can inflict on other enemies, a Bacura will only be destroyed upon hitting it 256 times (a reference to Xevious being an 8-bit game).[1] Each Bacura is worth 1,550 points, and destroying any of them will award the player with the "Gust Notch" nickname at the end of the mission.

The Bacura were discovered in Infinity by various players on June 20, 2014.[2][3][4][5] Infinity marks the first appearance of the Bacura outside of a Xevious or Tales title. Their appearance was not confirmed by Project Aces until July 2, 2014 when they tweeted an image of Xevian text.[6] The text translates to "LIE BELTA NAPROOSA BACURA", which means "The Bacura are approaching."[7]

During the weekends of July 4–6 and 11-13, 2014, Project Aces increased the chance of the Bacura appearing in Tokyo. Additionally, various Xevious-themed emblems were available as random drops. After July 13, the Bacura no longer spawned, though the emblems were later made available in the Special Supply catalogue.

The Bacura began to spawn again on April 1, 2016, and were added to Tokyo Martial Law (HARD) since the mission did not exist when they first appeared. Since then, they have had a chance to spawn in both missions.

The Bacura were alien units first featured in Xevious, an 8-bit Atari arcade game developed by Namco (with Bandai involvement). Bacura were invincible rectangles that endlessly flipped towards the bottom of the screen, and the player - who had no method of destroying them - was forced to avoid them.

Later games in the Xevious series featured different types of Bacura, including some that would flip in the opposite direction as well as others equipped with turrets. They were also featured in numerous Tales games, including Tales of Symphonia and Tales of Xillia, where they could be destroyed.

Retrieved from "https://acecombat.fandom.com/wiki/Bacura?oldid=259488"
Community content is available under CC-BY-SA unless otherwise noted.