A ballistic missile is a missile that follows a ballistic trajectory. Unlike cruise missiles, which are powered throughout their entire flight, ballistic missiles are only powered during relatively brief periods and mostly rely on gravity to hit their targets. They support a variety of warheads including conventional, burst, and nuclear warheads.

There are multiple types of ballistic missiles, depending on their design, launch platform, and intended target.

In Ace Combat, the most common type of ballistic missile is the intercontinental ballistic missile (ICBM). These missiles always exit the atmosphere and, as their name suggests, can reach other continents. Modern ICBMs are equipped with multiple independently targetable reentry vehicle (MIRVs) to deliver multiple warheads to multiple targets.

A less-common type of ballistic missile in Ace Combat is the intermediate-range ballistic missile (IRBM). These missiles may exit the atmosphere, depending on their design and range, but they do not have enough range to strike other continents.

When a ballistic missile is fired, it goes through two or three phases of flight, depending on its range:

Various methods exist for defending against ballistic missiles. The most common defense method depicted in Ace Combat is destroying the launch platform before it launches a missile, or directly destroying a launched missile during its boost phase. In the latter case, the player uses their aircraft's weapons to destroy the missile before it reaches stalling altitude.

An alternate defense method involves vaporizing a launched missile with a laser. The player can do this as part of the aforementioned method of destroying a missile during boost phase (using a special weapon such as the Tactical Laser System), but specialized platforms exist for this purpose, including Excalibur (both the Strangereal and Infinity versions of the weapon), the AL-1B and the Arkbird.

Following the Belkan nuclear detonations in 1995, weapons of mass destruction were greatly reduced in number. ICBMs were not outlawed or abandoned, but they were certainly less prevalent on Strangereal's Earth than on our real Earth. They are only known to have been used on the Usean and Osean continents.

In the last days of the Belkan War, the V2 was acquired by A World With No Boundaries and was loaded onto an ICBM in the Avalon Dam missile facility in an attempt to rid the world of global politics. The Galm Team, supported by the Allied Forces's Avalon Dam Strike Team, entered the facility's perimeter to halt the launch of the V2. The Galm Team performed a tunnel flight to destroy the control systems found inside. When the systems were destroyed, however, Cipher's former wingman Larry Foulke appeared flying the ADFX-02 Morgan, which has the back-up control systems to handle the V2 launch. Cipher shot down Foulke and in the process, the V2 exploded harmlessly in the atmosphere.[1] [2]

At the end of the Usean coup d'état, the Rebels attempted to utilize Fortress Intolerance to launch an ICBM against Yuktobania to cause a worldwide conflict and escape in the chaos. Phoenix disabled all of the fortress's defenses and successfully performed a tunnel flight into the fortress and destroyed the missile. The resulting explosion caused extreme damage to the fortress, rendering it useless.[3]

After the Continental War ended, Erusean forces brought Megalith online. While Megalith was a rocket launch facility designed to shoot down asteroids in orbit, the facility stored five missiles believed to be ICBMs. ISAF performed an offensive against the facility, and Mobius 1 physically destroyed the ICBMs. As with Fortress Intolerance, the resulting explosions destroyed the Megalith facility.[4]

During the Lighthouse War, Erusea activated its IRBM silos in Sierraplata in order to conduct strikes on Osean strategic targets. Strider Squadron was deployed to destroy the silos, using targeting pods to mark the silos for Osean bombers. Erusea managed to launch three IRBMs from underwater silos, but all were intercepted and shot down by Trigger before they could reach a critical altitude.[5]

During the New Russian Federation uprising, Task Force 108 learned of an NRF-controlled ICBM launch facility within Russian territory. They deployed an RQ-4 Global Hawk to analyze the base in case a launch was ordered, as well as Razor to sneak into the launch facility and destroy all of the launch platforms. Razor successfully avoided the radar, but the NRF was given a launch order regardless (possibly by Sergei Illich, whose Red Moon Squadron was flying with Warwolf Squadron to support the operation). Razor managed to destroy all of the silos and most of the heavy trucks, but one truck had managed to escape the bombing. While all squadrons attempted to escape from the area, the Global Hawk UAV located the truck moving to launch position. By the time Razor turned around, the ICBM had been fired with a trajectory towards the United States. William Bishop flew in close range and managed to destroy the missile before it left boost phase.[6]

Following the creation of the USEA Federation, Task Force 118 discovered the Avalon Dam facility in Russia. The facility was secretly an ICBM launch facility, and a launch was attempted on March 3, 2020. Task Force 118 deployed an AL-1B in case any missiles were launched, and performed a offensive against the facility. After opening the facility's shutters, Reaper flew inside and destroyed all of the missiles contained within. However, one missile was being stored outside of the facility and it was launched immediately. The AL-1B was shot down by unidentified hostiles, forcing all of 118's pilots to engage the missile before it left boost phase. Reaper managed to get the closest and successfully destroyed it.[7]

During Task Force 118's various operations across the world, multiple ICBMs under USEA control have been launched from the Alps, Iyuli, and Moscow. 118's mercenary pilots continuously engage the missiles when they are discovered, hoping to destroy them during boost phase.[8] It is unknown if any of them successfully hit their targets, or what their targets were. 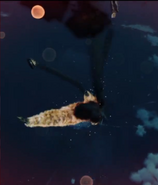 Erusean IRBM launching
Add a photo to this gallery

Retrieved from "https://acecombat.fandom.com/wiki/Ballistic_missile?oldid=259379"
Community content is available under CC-BY-SA unless otherwise noted.