"Pilots, see if you can find the terrorists' truck from up there. Don't let them escape ... I don't need you fighters to fire on them or anything."
― Police Headquarters communicator[1]

On November 4, 2010, Yuktobanian commandos carried out an attack on Bana City with chemical weapons in retaliation for the Dresdene terrorist attack, which had occurred two days earlier. The Bana City Police Department was one of the first emergency services to respond, but it was quickly overwhelmed by the attack's citywide scope.[1]

When Wardog Squadron arrived and began spreading a neutralizing agent around the city, the police continued to evacuate civilians and initiated an intensive search for the culprits. The Yuktobanian commandos' getaway truck was soon sighted heading southbound on Route 22, and Patrol Car Baker 7 began a high speed pursuit. BCPD's headquarters then requested Wardog's assistance, which was ultimately granted after word of the simultaneous attack on Apito International Airport reached Capital District Air Command.[1]

As the pursuit progressed, and additional patrol units joined the chase, a number of other officers began setting up a barricade across the eastern end of Marvin Bridge. The pursuing officers were able to corner the fleeing terrorists,[1] who eventually surrendered to them and were taken into custody.[2]

A Bana City police interceptor in pursuit of the terrorists 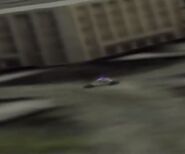 Bana City PD interceptor
Add a photo to this gallery

Retrieved from "https://acecombat.fandom.com/wiki/Bana_City_Police_Department?oldid=198849"
Community content is available under CC-BY-SA unless otherwise noted.