Prior to the merge, all Ace Combat games were published solely by Namco up to and including Ace Combat 5: The Unsung War. Immediately following the merge, the company was known as Bandai Namco Games Inc. (with variations on the name for its respective subsidiaries), and published all games in the series starting with Ace Combat Zero: The Belkan War up to and including Ace Combat: Assault Horizon Legacy +. In April 2015, the company renamed to Bandai Namco Entertainment; no Ace Combat games have been released under this name yet.

In addition to Ace Combat, Bandai Namco is also known for the Tales, Soul, Tekken, Ridge Racer, and Pac-Man series. 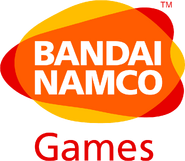 Retrieved from "https://acecombat.fandom.com/wiki/Bandai_Namco_Entertainment?oldid=143424"
Community content is available under CC-BY-SA unless otherwise noted.