Along with the Ace Combat franchise, Bandai Namco is known for developing the Tales, Soul, Tekken, Pac-Man, and Ridge Racer franchises.

All Ace Combat games up to and including Ace Combat 5: The Unsung War were published by Namco.

Following the merge, all games in the franchise from Ace Combat Zero: The Belkan War up to and including Ace Combat Infinity were published by Bandai Namco Games.

Following the April 2015 name change, Ace Combat Infinity was updated to use the new Bandai Namco Entertainment name. Ace Combat 7: Skies Unknown was the first Ace Combat game to be initially published under this new name.

Since 2001, an internal development team within Bandai Namco has been credited for developing the Ace Combat games. The team was known as "The AC04 Project" for Ace Combat 04: Shattered Skies, but was later renamed to Project Aces for Ace Combat 5: The Unsung War and all subsequent games, persisting through the merge and name changes. 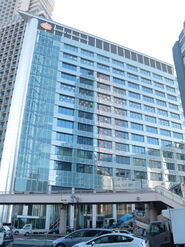 Old Bandai Namco HQ building in Shinagawa, Tokyo (demolished in 2016)
Add a photo to this gallery

Retrieved from "https://acecombat.fandom.com/wiki/Bandai_Namco_Entertainment?oldid=243814"
Community content is available under CC-BY-SA unless otherwise noted.