is a Special Aircraft based on the Bf 109 G-10 used by Hans-Joachim Marseille, a German ace from World War II. 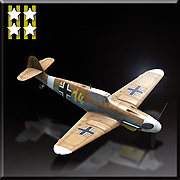 "A special version of the Bf 109 based on the one flown by an ace pilot during the last great war.
Taking advantage of its superb acceleration, it can freely go back and forth between pre-stall and maximum speed, depicting a next-dimensional arc though the skies.
Regrettably, its shooting capabilities are dependent on the skills of the pilot. Continue to accrue experience and one day you may suddenly achieve "clarity"."
― Hangar

This aircraft was only available to the top 300 participants in the "Piston Aircraft Battle" Online Co-Op Missions Ranking Tournament in October 2015.

Nickname
Upgrading this aircraft to Level 20 unlocked the Geniu of Geniuses nickname for use at any time.

Retrieved from "https://acecombat.fandom.com/wiki/Bf_109_G-10_-Flying_Aces-?oldid=223882"
Community content is available under CC-BY-SA unless otherwise noted.