is a special variant of the CFA-44 Nosferatu featured in Ace Combat Infinity, featuring the livery of Ilya Pasternak. 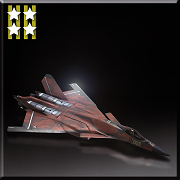 "A special version of a next generation carrier-based fighter flown by an ace pilot from a certain military nation. It is equipped with experimental weapons including a versatile railgun unit and all direction multi-purpose missiles. It also features excellent maneuverability making it difficult for enemies to cope with. Under harsh battle conditions, the Strigon Leader acted as the rear-guard within his unit to ensure the safe return of his wingmen."
― Hangar

Nickname
Upgrading this aircraft to Level 20 unlocked the Entrust nickname for use at any time.

Banner advertising the aircraft and the Rafale M Event Skin #01

with a QFA-44 Camilla

with a QFA-44 Camilla

Retrieved from "https://acecombat.fandom.com/wiki/CFA-44_-Strigon_Leader-?oldid=224920"
Community content is available under CC-BY-SA unless otherwise noted.