"The Demon Lord of the Round Table. A warrior who soared through the Belkan War, inspiring both fear and admiration. His presence filled the skies for but a few short months before he disappeared. Apart from that, nothing is known about him."
― Brett Thompson, Warriors and the Belkan War

Cipher (サイファー Saifā) was a mercenary pilot employed by the Ustio Air Force's 6th Air Division. He was the flight leader of Galm Team and primarily led the squadron during the Belkan War of 1995. Cipher is the player character in Ace Combat Zero: The Belkan War. His signature aircraft is the F-15C Eagle.

Cipher is well known for having an extraordinarily high number of kills in Area B7R, which earned him the nickname "Demon Lord of the Round Table".

"Cipher, I got a feeling you and me are gonna get along just fine. Buddy."
― Larry Foulke to Cipher[2]

Political upheaval in Belka led to the country's military forces assembling at its borders in the 1990s. Ustio, fearing the possibility of war, hired mercenary pilots by 1994 to bolster the country's defenses.[3] Cipher joined the 6th Air Division around this time, but his role prior to the war's outbreak remains unknown.

On April 2, 1995, a week after the Belkan War began, Cipher participated in Operation Crossbow, his first recorded battle, to defend Valais Air Base from a Belkan bomber squadron. Valais base command assigned Cipher to the flight lead position of Galm Team at this time, which also included his wingman, Larry Foulke. Alongside other Ustio mercenaries, Cipher and Pixy shot down all of the Belkan bombers.[2] Two weeks later, they took part in an operation to clear out Belkan forces blocking Route 171, a transport route in the region of Arlon, to establish a supply line between Ustio and the Osean Federation.[4]

On April 20, Galm Team was issued an emergency order to conduct a reconnaissance mission (codenamed "Operation: Choker One") at the famed Airspace B7R, a desertic valley located in the Ustio-Belka border known as the "Round Table". After penetrating the local defense perimeter and entering the Belkan side of the Round Table, the mercenaries were intercepted by an elite Belkan squadron. A fierce engagement ensued, but the Galm Team eventually prevailed. Their victory at B7R would mark the beginning of their fame. Later on, they assisted the 3rd Osean Naval Fleet in April 24 during the Battle of Futuro Canal, clearing out the Futuro Canal of Belka forces so that a link between Ustio and Osea (from here on out referred to as the Allied forces) could be secured, and in May 12 cooperated with the Osean Air Force's 101st Airborne Division and the 122nd Airborne Division in retaking the mountain town of Solis Ortus, so as to establish a foothold for the upcoming siege of Directus, Ustio's capital city.

A day later, Galm Team and several Ustio/allied battalions launched an all-or-nothing attack on Directus, ultimately sanitizing the town of all occupying forces. Operation Constantine, as the mission was known, ended in a climactic duel between the Galm Team (Cipher and Larry) & the Gelb Squadron, a pair of Su-37 aces ordered to keep the city under Belkan hegemony at all costs. The flight leader was killed, while Rainer "Cormorant" Altman, his wingman, safely ejected, later parachuting into the town. The Ustio branch of the Belkan Army defeated and expelled from the country, the crew at Valais decided to start a party, commemorating the country's liberation. From this moment, the Allied forces were ready to bring the war to the Belkan homeland.

Five days after the liberation of Ustio, Cipher and Pixy participated in Operation: Hell Bound, a large-scale Allied invasion of Glatisant, a region on southern Belka's Mt. Ivrea region, launched under the suspicion that Belka was manufacturing nuclear weaponry. In the 19th of May they assisted in a mission to open a safe passage for tanker aircraft through the Schyane Plains, Belka's 2nd line of defense. Once the battle was almost over and the Halo Squadron arrived, Galm Team was forced to flee after the former were annihilated by a strike from Excalibur, Belka's ballistic missile defense weapon. In May 23, Galm Team participated in a mission to destroy Excalibur at the plains of Tauberg. After having its firing radome destroyed and its mainframe dangerously tilted in an angle, Cipher dealt the killing blow to the weapon, causing its upper area to shatter and collapse. In the ensuing celebration, an Ustio fighter pilot claimed that Cipher was "the guy who pulled Tauberg's sword", alluding to the tale of King Arthur.

Five days following the destruction of Excalibur, the mercenary pilots were dispatched on an emergency sortie at the Round Table, where the largest air battle of the Belkan War was taking place. After arriving to the battlefield, Cipher and Pixy singlehandedly turned the tables, helping the Allies clear most of the skies. Towards the end of the battle, Galm was engaged by a Belkan ace team, but easily managed to win. The outcome of Operation Battle-Axe would result in Cipher earning the nickname of the "Demon Lord of the Round Table".

Last stages of the war and Operation Ravage

In June 1, the Ustio military was requested assistance by the Osean Air Force, who were conducting a bombing raid on Hoffnung, one of the Belkan Federation's leading weapons production centers, and Galm was dispatched. Upon arriving to Hoffnung, they discovered that the city had become a smoldering inferno, the Allied bombers having started their attack run with no regards whatsoever to civilian casualties. After sanitizing the city of all remaining ground and air resistance, the mercenary pilots departed, a shocked Solo Wing Pixy muttering "Damn them all..." as they went.

Four days after the Hoffnung incident, the Galm and Crow teams launched on a mission to assist ground troops on an invasion of Belka's last remaining weapons facilities at Sudentor, taking a shortcut through the Waldreich Mountains. Halfway through their trip, the mercenaries came across a Belkan bomber unit with nuclear weaponry headed towards Ustio. Fighting against time, they scrambled to intercept the bomber aircraft, dealing with their escorts as they went. After an unusual turn of events involving a flight of Belkan aircraft assisting the pilots in destroying the bombers, all targets were eliminated. Several seconds after the end of the battle, a flash of light filled the sky as the Belkans detonated seven V1 nuclear bombs on their own soil, killing an estimate of 12,000 people in the process. In the seconds following the catastrophe, Pixy was contacted over the radio by Joshua Bristow, who had fought with them during Operation Battle-Axe. After a short conversation, a morally shattered Pixy decided to defect, but not before attempting to kill Cipher. Following his failed assassination attempt, Larry fled to North Belka, disappearing from radar while his former buddy was left behind to deal with incoming reinforcements. Later on, Cipher returned to Valais AFB alone.

A week after Operation Ravage, the Ustio military received reports of Belkan forces opposing the country's change of government. In June 13, Cipher was dispatched to Mt. Schirm in North Belka, his objective being clearing the area of all insurgent forces. Prior to this mission, the Galm Team was reformed, with Patrick James Beckett, the Crow Team's number #3, becoming his new wingman. Later on, they participated in the 20th in a secret operation to clear out Belkan insurgents at Anfang, a coast region in Belka, during the peace treaty between all belligerents of the Belkan War.

A World With No Boundaries insurgence

Several months after the Anfang siege, the Galm Team saw action once again. In December 25, the revolutionary group A World With No Boundaries revealed itself to the world by laying siege to the city of Lumen, where the Belkan War peace treaty had been signed in June, using a hijacked prototype heavy command cruiser, the XB-0 Hresvelgr. The Hresvelgr then headed to Ustio, launching an air strike on Valais Air Force Base. While the base suffered considerable damage, the attack ultimately failed. Hours after the attacks, the Galm team launched and intercepted the airborne fortress at the Walreich Mountains. At the end, the ship was destroyed.

Four days later, in December 31, an investigation conducted by the Allied forces revealed the location of A World With No Boundaries's main headquarters at Avalon Dam, a military facility at North Belka, as well as the fact that they were in possession of a V2 MIRV weapon. Taking off at 11:00AM, Cipher and PJ took off in their final sortie. Their destination being Avalon Dam, they flew northwest, taking a shortcut through Area B7R. Upon reaching the mountain area at the Round Table, they were greeted by the ringleader of the coup d'état and his squadron, who were shot down following a fierce dogfight.

A few hours later, the mercenary aces arrived at Avalon Dam, during a massive engagement between the revolutionary soldiers and the Allied forces. Weaving through Mund Valley's canyon, they arrived at Avalon Dam proper. Cipher dove into the innards of the facility, destroying the V2's launch controls systems and their defensive lock joints, thus preventing the imminent launch of the weapon. After Cipher escaped from within Avalon, he and PJ remained in stand-by while AWACS Eagle Eye analyzed the situation.

While they awaited for Eagle Eye to report, Cipher and PJ flew over the skies of the missile facility. Patrick James commented how he was planning to propose to his girlfriend upon returning to base, but were interrupted by the unexpected appearance of an unidentified aircraft on radar. Having noticed a beam of light coming from the horizon, Beckett dove in Cipher's way, being presumably killed by a laser beam. Seconds later, Pixy's voice was heard on the radio.

Following this transmission, Cipher and his former comrade, flying an experimental Belkan fighter, engaged in one final duel. The mercenary ace managed to overpower Pixy's advanced technology through sheer skill, all while weaving through laser beams and ballistic missiles. Towards the end of their engagement, Pixy activated the ADFX-02 Morgan's secondary V2 launch system, and the missile sprung back to life. With his enemy being protected by an advanced ECM shielding system, Cipher was forced to attack Foulke head-on, in what is best described as a duel of airborne jousting. Ultimately, Galm 1 managed to critically damage Pixy's Morgan, narrowly evading a direct collision with his enemy. After the destruction of the ADFX-02, the V2 missile self-destructed in a colossal explosion over Avalon Dam, marking the end of the Belkan War. Following his victory, Cipher and Eagle Eye returned to Valais.

Several months after the war, the Demon Lord disappeared from the skies, never to be seen again.

Cipher's legacy as a main character has expanded into a number of non-canonical appearances in subsequent Ace Combat titles:

In addition, Cipher's livery has appeared in many games after Ace Combat Zero as an unlockable livery usually for the F-15C Eagle. This notably includes the F-15C -Cipher-

(Left to right) Cipher's and Pixy's F-15Cs on the tarmac 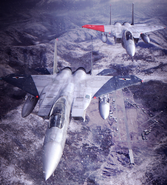 Cipher and Pixy over Valais Air Base in eastern Ustio

Cipher over the Tyrann Mountains

The F-15C -Cipher- skin in Ace Combat 7: Skies Unknown
Add a photo to this gallery

Retrieved from "https://acecombat.fandom.com/wiki/Cipher?oldid=263028"
Community content is available under CC-BY-SA unless otherwise noted.