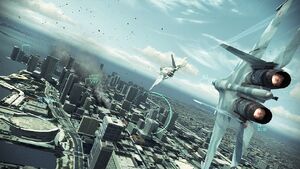 Close Range Assault is enabled by simultaneously pressing the controller's shoulder buttons, or the C key (default) on a PC keyboard, during gameplay. Likewise, a player can exit CRA by pressing the same buttons or key.

Dogfight Mode (DFM) is one of the two CRA variations, available to fighter and multirole aircraft. It is required to destroy enemy targets labeled as "TGT_LEAD," but can be utilized on any aircraft of any type besides helicopters.

When the player approaches a targeted enemy aircraft from its rear arc, and the distance to the enemy is near enough, a flashing circle will appear around the target. Pressing the CRA button(s) while the circle is on-screen will engage DFM. Once successfully activated, the camera re-positions itself to a much closer view, and the game partially overrides some of the controls, aligning the player's aircraft no more than 500 feet away from the target aircraft. The player must still maintain proper attitude and heading with the enemy; allowing the enemy to maneuver completely out of the player's forward arc (i.e. off the screen), or allowing the distance to increase too much, will result in the enemy escaping (DFM will terminate). Note however, that approaching too close may result in some enemies (especially Aces) performing a Counter-Maneuver.

While DFM is successfully engaged, a small circle, known as the "Assault Circle", will appear on-screen. It expands as the player approaches the enemy, but shrinks if the distance increases. The player must maneuver so that the enemy is inside the circle, and when the enemy aircraft is inside, a bar in the inner rim fills up clockwise. Once the bar fills completely, the circle will turn red and a missile lock tone will be heard, indicating that the Assault Circle is charged and the player can fire a missile with enhanced accuracy and damage. Should the player have certain special weapons selected, the Assault Circle's behavior will change appropriately. For example, when using QAAMs, instead of staying in the center of the screen, the Assault Circle is able to move to follow the target aircraft, making it easier to obtain an enhanced missile lock. When using XMAAs or XLAAs, the Assault Circle disappears.

Enemy fighters will also attempt to pursue the player and sometimes trigger DFM against the player. When DFM is engaged against the player, the main objective is to maneuver to stay out of the enemy's Assault Circle to avoid the enhanced missiles. A pursuer can be shaken off either by maneuvering out of their front arc, or increasing the distance until the pursuit DFM is canceled. However, the player can also utilize a "counter-maneuver", which will reverse the position of pursuer and pursued, ending with the player behind the enemy plane and engaging DFM offensively.

To perform a counter-maneuver, the player must force the enemy pursuer to come too close by using a combination of maneuvering and rapid air-braking, and then level his plane. As the enemy is forced to approach, the distance between a green and a red arrow at the bottom of the screen will decrease until it fully overlaps (the arrows representing the player and enemy, respectively). Once the arrows have overlapped, the arrows will start flashing in a diagonal fashion, and the player can press the CRA button(s) to perform the counter-maneuver. The actual maneuver depicted depends on the direction of the flight stick when the buttons are pressed: pushing down will result in a Kulbit maneuver, pushing left or right will result in a barrel roll in that direction, and pushing up will result in a Cobra maneuver. When performed successfully, these invariably result in a reversal, with the player's aircraft in the pursuit position behind the enemy, in DFM mode.

Likewise, if the player is pursuing an enemy in DFM, the enemy can attempt to perform a counter-maneuver, indicated by a diagonal red arrow briefly appearing on the enemy aircraft. If the player manages to press the CRA button(s) in the short time window while the arrow is visible, they will perform a "counter-counter-maneuver," in which their aircraft will follow the enemy perfectly through the maneuver with the player's aircraft nose aimed at the enemy's topside (typically involving a well-aligned Cobra or a tight Immelman), during which they will have a brief opportunity to fire at the enemy aircraft using the machine gun, with 100% accuracy and highly increased damage. Notably enough, one counter-counter-maneuver is mandatory to finish the final duel with the story's main antagonist.

A "Direct Shot" is an enhanced missile attack involving the Assault Circle. If the circle is fully charged and the target is located directly in the center, the next missile launched will gain and even further boost in precision and power. Direct missiles are nearly impossible to evade, and the enemy plane will be instantly destroyed.

The availability of a Direct Shot is mainly indicated by the Assault Circle tone sound having a higher pitch than normal. However, this is difficult for some players to rely on in the heat of combat, especially with the engine noise of both the player's and enemy's aircraft in the background, as it depends on the ability to hear the change in pitch. Regardless, keeping the target aircraft aligned with the center of the Assault Circle is typically sufficient to trigger a Direct Shot, and that course of action is also congruent with attempting to land gunfire on the target while waiting for the Circle to lock on.

An "Assault Chain" occurs when a player shoots down an enemy target in DFM and automatically engages another target in DFM. This is only possible if another enemy is in a position where the green flashing circle would have appeared if the player was not already in DFM, at the moment the original target is destroyed. It is possible to chain numerous enemy aircraft in an Assault Chain, if each kill is timed correctly so that another enemy aircraft is directly ahead to be pursued just as the previous one is defeated. However, to some degree, this still relies on various enemy aircraft maneuvering in a particular way, which is a factor beyond the player's control.

In a few occasions in certain missions, the player encounters situations that allow this to occur easily. This typically happens when the player approaches from behind and "ambushes" multiple unaware enemy aircraft that are flying in formation, quickly eliminating them before they break formation to engage.

Air Strike Mode (ASM) is the other variation of CRA, available to attacker, multirole, and bomber aircraft. It is rarely compulsory, but the bonuses of improved weapon cooldown and accuracy allows complete destruction of numerous objective targets in a shorter amount of time. In addition, damage performed on some targets (especially in multiplayer) is increased when engaged in ASM.

ASM routes are shown on the radar map as a path with arrows, denoting the route of the ASM route, that overflies groups of ground targets that have not been engaged yet. These routes have specific entrance points that players must approach. Similar to DFM, once the player gets close to an entrance, a green flashing circle will appear around it, and the player must press the CRA button(s) to engage ASM. Again, the camera re-positions itself close behind the player's aircraft with a good angle of ground targets ahead, and the game restricts some of the controls. However, the player is still required to control the aircraft in ASM, and inattentive piloting can result in crashing into the ground.

While in ASM, all of the player's weaponry is enhanced to have quicker cooldowns, enhanced damage, and enhanced accuracy. Bonus points are awarded after the mission if all targets in an ASM route are destroyed in a single pass (destroying all mandatory objectives while flying the route only once).

In multiplayer, allies can assist in engaging CRA through "DFM Support" or "ASM Support." Support is initiated when two or more players engage the same enemy aircraft in DFM, or enter the same ASM route. This can also be done by pressing the Down button on the D-Pad when "DFM Support" or "ASM Support" is indicated, which requires the supporting player(s) to be close enough to the target aircraft or ASM entry point. Skills (see below) can enhance the benefits of DFM/ASM Support.

Notably, a particular campaign mission requires the player to perform ASM support with another aircraft to assist in a high-intensity SEAD operation (Suppression of Enemy Air Defense), rapidly destroying anti-aircraft artillery and SAM sites along the route. Failing to perform this correctly will result in the friendly pilot being shot down and result in mission failure.

In Free Mission and multiplayer, players can equip skills to affect how CRA functions. The skills that affect CRA are as follows: