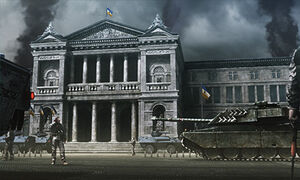 A coup d'état (pronounced koo day-tah), also known as a coup (koo) or a rebellion, is an event where one party attempts to overthrow a country's current government.

Coup d'etats are usually performed through military force. Unlike terrorist attacks, which are used to invoke fear, coup d'etats are intended to remove and replace a country's government with one the coup's supporters believe would be more beneficial.

Coup forces - the people fighting in support of the coup d'état - typically have a military background. However, they are usually a minority compared to the loyalist government forces or their hired mercenaries. As a result, coups are rarely successful.

There have been many coup d'etats in the Strangereal universe.

Retrieved from "https://acecombat.fandom.com/wiki/Coup_d%27%C3%A9tat?oldid=223940"
Community content is available under CC-BY-SA unless otherwise noted.